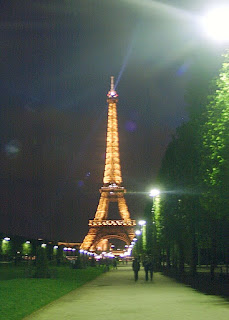 In "Reminding Me of You," Mia and Bryn kiss for the first time up the Eiffel Tower. Mia is petrified of heights and Bryn comforts her. That's the start of a Paris affair that leads to much confusion in Mia who thinks she loves someone else.

I adore Paris. Mostly because it contains the Louvre and I'm crazy about the famous artists' works, especially Renoir and Monet's Impressionist paintings. But I also love the French architecture and their quaint restaurants. The whole Mediterranean area appeals to me and I would love to visit there one day. That's why I set my book partly in Paris.

The Eiffel Tower is one of Paris's attractions. When I did research on it, I discovered how huge it actually is.

According to Wikipedia, the Eiffel Tower is the tallest structure in Paris and is the most visited paid monument in the world. The tower received its 250 millionth visitor in 2010.

Even though it no longer holds the title of the highest building in the world, it certainly holds merit in terms of height. It's 320 metres or 1050 feet high. The highest accessible platform available to view from is about 279 metres or 916 feet high and is only reached via a lift. Mia and Bryn only went up to the first platform which meant they climbed 300 steps.

The Eiffel Tower was built in the World Exhibition of 1889 in celebration of the French Revolution a hundred years earlier. At the time, many people feared it wouldn't fit into French architecture and that it would be copied and architecture would lose it's individuality. This didn't happen as predicted. The tower was designed by Gustav Eiffel who used to build bridges and he incorporated his bridge building techniques into the design of the structure which took more than two years to complete. It was constructed out of 12,000 prefabricated pieces of wrought iron fastened with about seven million nails.

What is the magic of the majestic structure?

I think the magic is in its individuality. It creates the characteristic skyline of Paris and is an icon of France. Close up, the structure is enormous, towering above you like a giant mesh of iron, light filtering through the weave in beautiful patches. At night, it is lit with a myriad of lights, sparkly and energetic. Not only looking at the structure is magical, but viewing Paris from the structure is even more so. Now I speak as if I've been there. This link makes me feel like I'm really there: Panorama. Paris is truly the most beautiful city in the world! You just have to watch the whole panorama on this link.

I'm hosting a giveaway of "Reminding Me of You," to a lucky commentor on this blog post. Taste a bit of Paris in my romantic novella.