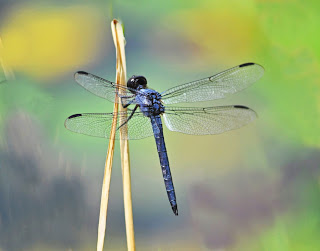 I'm fascinated with dragonflies. They're whimsical little creatures that make a body of water sparkle and look beautiful. In Dragonfly Moments, the dragonfly features a few times and holds a special symbolism for my heroine, Tessa. Now, of course I can't tell you what. You need to read the book to find out.

Dragonflies come from the order Odonata which is a Greek word for "tooth." It was thought they had teeth but instead they have super-strong mandibles to crush their prey. The creature has 5,000 species (including the damselfly.) They are brilliant flyers and engineers have studied their flight pattern to design a flying robot. If they couldn't fly, they wouldn't eat because they eat in flight. Mozzies are their favourite meal. I think I'd like to hire a bunch of them for summer nights. They are also master migrators and one species can migrate about 11,000 miles across the Indian Ocean. And contrary to popular opinion, they live for more than one day. They can possibly live to a whole year, but normally a few weeks.

I've been considering getting a tattoo. I'm actually a very conservative person and for many years used to dress like an Amish, covering my skin ridiculously. I loosened up over the years, thankfully. But a tattoo? Since I've hit forty, I wanted to do something daring and outrageous. Unfortunately, I haven't taken the plunge, purely because I'm petrified that years later I won't like the picture I chose. I wonder if I'll ever do it. There was a point when I searched for pictures for a tattoo to put on my ankle. The dragonfly appealed to me. Partly because of my book and also because it looks cute. When I searched for pics of dragonflies, I stumbled upon some fascinating symbolism of the little creature. The symbolism is almost endless, but here are few lovely thoughts:

According to some legends, dragonflies were believed to possess supernatural power and be spiritual messengers. They were bearers of light, and in Ireland, they were considered the horses that fairies rode. Mmmh, now that sounds like an interesting thought for a fantasy story. The Lakota tribe in Japan used to invoke them to help defeat their enemies as they represented the spirit of illusion.

I think this all comes from the fact that the insect's wings refract light and many colours can be seen in them.

What feeling does the dragonfly invoke in you? Sometimes I think its sinister, other times beautiful and graceful but always mysterious.
Posted by Kathy Bosman at Thursday, June 13, 2013