Today, I'm hosting Clare Dargin, a fellow Decadent Publishing author. She writes science fiction with a romantic twist. Today, she is talking about her book "Ice and Peace" which came out in April 2013 and is book two of her "Cold Warriors" series. She also wrote "Kybernatia," "Fugue," "Speculative Sky," and "Zenward's Magic."

A Love So Close You Can Feel It

There's something about a hot guy in uniform who's touchable but at the same time out of reach. That kind of man was on my mind when I wrote Colonel Medoro Keegan in Cold Warriors. A man who has chosen to be an island onto himself, he is in a sea of humanity, yet is alone.

Unlike some heroes of this sort, they have no friends and live on the fringes of society. Keegan is anything but that. He has two very good friends whom he trusts, he is respected by his colleagues and is considered to be on the career fast track but on the inside, he feels like a hamster on a wheel. He's going through the motions but he ain't going anywhere.

All that changes when Caitlin Driskoll enters his life. In the beginning just a 'passenger' in a cargo manifest, she is but one of many who are to be sent out as cannon fodder for a military with dwindling numbers. In a frozen stasis for nearly a hundred years, because of a long gone medical fad, she awakens to find she has been recruited to fight in a war she knows nothing about.

From day one, her strength and her annoyance has been the light that shone in an otherwise darkened existence. Attracted to her, he fights between the rules of his job and society which says they can't speak, much less touch. They both struggle to not only survive but to explore the attraction they feel for each other. 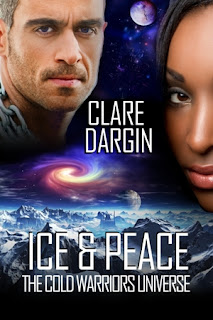 In the second book, Ice and Peace:

A New Threat? After a long and vicious war, peace is on the horizon for Earth and its allies. However, a series of mysterious attacks on several secret military installations causes hostilities to rise once again.

Redemption. Having left under a cloud of disgrace, retired Marine Colonel Medoro Keegan is called back to duty.

Bound. His wife Caitlin, the only surviving member of her team, chooses to embrace life, albeit grudgingly, as a cryo soldier. Seen as sub-human, she is forced to serve a planet that denies her rights as a person.

Driven. Guided by their sense of duty and belief that some things are bigger than them, they are determined to risk it all.

Hope. The cost of war is high. Can their love and marriage survive? Or will it be killed off by the very same mission that brought them together?

Excerpt for Ice and Peace

“Sir,” a soft voice, feminine and sweet, beckoned his attention. He knew the voice, like he knew himself. His heart skipped a beat.

Rising slowly from his chair, Keegan cleared his throat and straightened his uniform. Suddenly, the room seemed unbearably long as he walked the three feet or so to be near her.

As he took in every detail of her, he was stunned silent. She wore a Marine Corps uniform with Navy insignia, with her hair neatly pinned off her neck and shoulders. Her clothes were pressed with a crease that could cut a major artery and her demeanor was impeccable. Something was not right.

Still, Caitlin was a sight for sore eyes. She was beautiful. Her petite frame was perfectly accented by the curves of her figure. And her brown eyes and coffee-brown skin was smooth, creamy.

Standing at attention, she did not meet his gaze. Though it was customary not to do as a sign of military courtesy, he could tell she was not doing it for that reason. Her gaze was different. Circling her, he tried to see if he could catch her watching him out of the corner of her eye. In fact, she appeared to be staring blankly ahead.

Peering directly at her, he spoke in a soft tone. “At ease.”

Pain pierced his insides. She was definitely not there. Keegan placed his hands on his hips and hung his head in defeat. The one thing that was supposed to go right did not. For whatever reason, they had placed her in a deeper state of mental control than she’d ever been in. He controlled the hostile emotions brewing with him. Touching her face gently, he felt her icy skin.

This is unacceptable! Not here. I will not let this happen here. Not under my command.

“Chief, listen up,” he said in an authoritative tone. He knew in this state, it was the only way he could speak to her and still have her respond.

Her response fueled his anger. “You are going to hightail it down to the doc and receive a full examination. Tell him it is based on my orders. He will know what to do. Is that clear?”

Knowing that she was under the influence of cryo neurotransmitters, Keegan figured the only way to combat it was to get someone to reverse it. They usually wore off once she was away from the stimulus triggers for a long period of time. But considering her stimulus triggers were high-ranking officers in uniform and combat situations, being around here meant she was going to be in a drone zone for a very long time. The last thing he needed was a zombie on board, especially one in charge of the lives others.

Only the jerks in psyche warfare thought doing this to someone would be a good idea. As long as he was running the ship, none of that would be allowed. There weren’t going to be any super zombies soldiers on board his ship. And he’d rollover in his grave before he let them do it to his wife.

“After you come back from the doc, you will report to me, understood?”

“Are there any questions?”

She did an about face before leaving the room. Keegan clasped his hands behind his back. In the blink of an eye, his joy had turned to sorrow. Now faced with the responsibility of looking after his wife, he wondered how could he handle the burden of command and still protect the woman he loved.

You can purchase Ice and Peace at Decadent Publishing and Amazon.
For the sci-fi lover in you, connect with Clare at:
The Embraced Blog
Clare's Blog
Yahoo Group