Today, I have Taryn Kincaid on my blog, a fellow Decadent Publishing author who calls herself boring but is far from that! It seems to be a common trend amongst authors to underestimate how interesting they actually are.

Taryn answered some questions so here they are:


What is the best thing for you about being a writer?
I think Mark Twain summed that up nicely: “The best thing about being a writer is having written.”
What is the hardest thing for you about being a writer?
Writing
What genre/s do you write and what genre is your latest release?
Currently, I’m all about the erotic paranormal romance, especially my SLEEPY HOLLOW series of 1Night Stand stories from Decadent Publishing. The latest is the smoking hot HEAT WAVE!  Although I do have a Regency romance [HEALING HEARTS] and a contemporary erotic romance [BLIZZARD] out there! My Sleepy Hollow series (plus BLIZZARD) will be released by Decadent Labor Day weekend in a print anthology! (Early release 8/29, for those of you for whom Labor Day weekend has not meaning!) I’m so excited.
What essential things have you learned about writing in the last year?
KISS: Keep it short, stupid!
Who is your favourite heroine from your books and why?
Currently, I love Zena Night, the heroine of HEAT WAVE. She was a problem child. I introduced her in LIGHTNING, her sister Lily’s story, and she was an over-the-top, sexy bad girl. I had to redeem her for HEAT WAVE. Quite the challenge!
What type of hero do you like? Super alpha, wounded or somewhere in between? Or even something totally different? You could give an example from a movie or well-known book.
Oh, I definitely love reading about the super alphas. But not if they’re bullies or get off on humiliation and inflicting pain.  Rhett Butler, the archetype alpha.
Tell us about your journey in writing this book.
Well, as I said, I’d already introduced the Zena Night character in LIGHTNING. So I had to develop a backstory for her that showed why she was acting out so much and so promiscuous. I also wanted to giver her a softer, more vulnerable side.
Tell us three quirky or interesting things about yourself.
I am boring as can be. Also kinda snarky. Which is why I have imaginary friends!
Three things, huh?
I’m not sure I can come up with three.
Here’s one: I used to collect small Chinese figurines known as “mud men” because they were sculpted from mud, then given color ceramic glazes. I don’t acquire them anymore – haven’t for years – but they still collect dust on my book cases, in my cabinets and on bric-a-brac shelves.
Sorry. That’s about all I’ve got!
What rituals do you use to help you focus or get the words down on the page e.g. music or a snack?
Coffee. Lots of it.
Mention something unique about your books and your writing style.
I am fond of the metaphor and simile. Perhaps overly so, sometimes. I love to play with my words,  even more than I like playing with my food!
What book would you like to work on next?
I’m working on a couple of secret projects. One involves food. One involves werewolves. Both are kind of departures for me…so we’ll see what happens there!
Today, she's talking about her new release, Heat Wave. 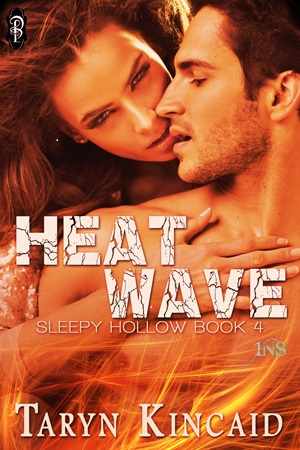 Sent into the human realm to retrieve prodigal princess, Zena Night, Bhyrne Raines is shocked and unprepared for his carnal reaction to the sexy succubus. In service to the succubus queen, the rugged enforcer must stifle the instant passion exploding within him. Fulfilling his royal duty doesn’t allow for quickie dalliances. His biological clock is ticking, and he begins to enter breedspawn, an intense and unstoppable frenzy of mating all fire-demon males must endure. But the more he wants to avoid Zena, the more he’s drawn to her.

Reluctant to give up her carefree life of partying among the mortals when the hot-as-sin Bhyrne comes to fetch her for the queen, Zena uses her succubus wiles to entice him, or at least delay the inevitable trip to the royal court. Once in the demon stronghold, hidden deep within the Catskill mountains, she learns the reason for the summons: she must choose a consort within two days.

Here's an excerpt from the novel:

Holy freeze gun, Batman. The words died before she managed to expose them to air. Her mouth snapped shut.

One of the Queen’s guards stood before her, huge and tall, nearly twice the size of most of the other males in the joint, a hella hunka supernatural male. Clearly not human, although Hugo Boss’d to his Adam’s apple in an apparent bid to fit in among the humans trolling for hot sex, illicit drugs, watered-down booze and loud music. Beneath the fabric of the unstructured designer suit, the toned muscles of a demonic warrior rolled like tidal waves. Even without the small lapel pin the uninformed might mistake for the The Rolling Stones’ logo, she’d recognize him for a captain of the guard. Maybe the Queen’s own Captain.

Hellfire and cotton candy. Trouble. T-R-O-U-B-L-E.
But, by the goddess, whattahottie! Despite her certainty that his presence in the club corridor boded ill for her, the force of her sudden hunger shook her.
Like lightening.
Thunder.
A desperate bolt out of the blue.
Instant connection to him on the paranormal plane, as if he’d wrapped her aura in gold chains and tugged her to him. But did that fast lane to heaven run one way or two? A grim expression straightened the lines of what otherwise might have been a generous, sensuous mouth. A military buzz cut had weed-whacked hair the color of iron. And it didn’t stop there. Without doubt, metal fortified every single cell in the massive male’s body, pure titanium flowing in his veins. The stern planes and angles of a hard-edged, swoon-worthy face set grimly as cement. Though he lounged in the hallway like any Archie or Jughead waiting in line to discharge his rented beer in a urinal, he exuded authority, his carriage and bearing such that he made the others look like a pack of Twizzlers. Oh. Yeah. More than a mere guardsman, she guessed. An enforcer.

You can buy Heat Wave here: