What is the best thing for you about being a writer?
Goodness. Where to start … I guess the simple answer is this: as a writer, I see a story in most things, which makes life a little more interesting, I think. My mind is always creating scenarios even when I don’t grab a paper and pen (read: laptop) the moment an idea hits, so I’m almost never bored with my own company.

What genre/s do you write and what genre is your latest release?
I write multicultural and interracial romance, but I do have some mainstream material in the pipeline as well (even though those have strong elements of romance). My stories are set in Ghana, but one of my WIPs moves my hero and heroine from Ghana to Sun City, South Africa. I’m very excited about that. My most recent book, Chancing Faith, is an interracial romance, though I have to say it is more of a cultural journey than a racial one.

What essential things have you learned about writing in the last year?
Keep reading and learning more about writing … and that if I want to make a career out of writing, I must write every single day – i.e. treat writing like a career rather than a hobby (hence the above-mentioned) resolution. This is a tough call for me, since I’m used to writing when the mood hits.

Who is your favourite heroine from your books and why?
To be honest, my favourite heroine is usually the one I’m writing about, so for now, it’s Patricia from my current WIP, Expecting Ty’s Baby. This is the book that comes after Chancing Faith. Patricia is a strong character and she’s a stubborn woman, which is a little different from what I normally do, and I’m having lots of fun writing about her.

What type of hero do you like? Super alpha, wounded or somewhere in between? Or even something totally different? You could give an example from a movie or well-known book.
I like all kinds of heroes, but I do find alpha males exciting. I love the things you can make an alpha say and get away with. They are just soooo scandalous. I think every man in the world should have some alpha qualities – or fake it. LOL. However, my heart lies with beta males in an alpha suit. Those are the heroes that make me think: I would totally fall for this guy if he were real. Those ones stay with me long after I’ve finished reading the book. I think I’d love to try an alpha male in a beta suit just for the fun of it…

Tell us about your journey in writing your latest book.
My most recent book is Chancing Faith and it was a long, but wonderful journey. As I mentioned earlier, I tend to write when the mood hits, so it took a long time to complete my first draft. The good thing was that because I’d been editing along the way, most of the original story made it to the published book.

It started back in 2004 with the idea that I wanted to write an interracial romance which wasn’t about colour, but it wasn’t until I saw a writing prompt, asking aspiring authors to write a first kiss scene that I actually wrote something. I got really excited about the prompt (if you’ve read any of my interviews, you know I love first kisses). I liked the scene I came up with and the story kind of grew from there.

It took four years of on an off writing to complete the first draft. In 2011, I entered it in an editor pitch competition and got a request for a full manuscript. And the rest is history :-)

Tell us three quirky or interesting things about yourself.
Hmm…
I like to make up words. (the latest being “Foremental” (the e is silent) – which combines forethought & good sense; works as an antonym of 'foreboding')
I think buses are sexy
Tea with lemon and honey is my cure-all – except, maybe, for a broken heart.

What rituals do you use to help you focus or get the words down on the page e.g. music or a snack?
Music. Definitely. Aside from that, I usually read over the last page or two to immerse myself in the story and soak up the mood before I start any new material.

Mention something unique about your books and your writing style.
Ooh. Tough one. I write African romance – i.e. African settings and African heroes/heroines, which is uncommon. African readers can easily relate to my characters, and for non-African readers my stories provide a cultural adventure. Most importantly, I write about people like you and me, stories that could happen to us…
And remember I mentioned I like to invent words? Yea, I always try to get away with slipping one of those in or at least finding a creative use for regular words. (insert evil grin)

What book would you like to work on next?
I’m actually working on the book after Chancing Faith, which is currently titled, “Expecting Ty’s Baby”.

Like its prequel, Expecting Ty’s Baby is a mixing of cultures, this time between an African-American hero and an African heroine. And it’s not smooth sailing. Throw in a secret baby and things get complicated.

I’m really excited about this story. Oh, and it’s definitely spicier than its prequel. *wink wink*

Give us a blurb of your book and if you want, a short excerpt. 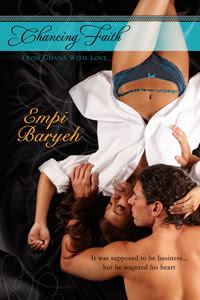 HE DIDN’T DO SHORT TERM RELATIONSHIPS…
American ad exec, Thane Aleksander, doesn’t date co-workers either—until business takes him to Ghana, West Africa, and he meets Naaki. Now he’s at risk of breaking all the rules. Can he stop this headlong fall before it’s too late?
UNTIL HE MET HER!
Naaki Tabika has a burning need to prove, to herself and others, that she’s more than wife and mother material. To do so, she’s prepared to give up everything for her job. Meeting Thane, however, makes her want to get personal. But falling for her boss could destroy her career. Will she be willing to risk it all for the one thing that can make her truly happy?
Two divergent cultures, two different races, two career-driven professionals, only one chance at true love—will they find the faith to take it, or will their hearts be sacrificed on the altar of financial success?


TEASER EXCERPT
Thane knew he was in for it now. He could hardly believe he’d really done it...

He’d kissed Naaki. Kissed her! What the hell was he thinking? Thane tossed his jacket aside and yanked off his tie. Of all the stupid—

Raking his fingers through his hair, he muttered a curse. The urge to hit something assaulted him with a force that should have surprised him. The perfect punching bag would have been his own body, since it was apparent that he needed to pound some sense into his skull. Right now, the only thing pounding was his heart as it threatened to burst out of his chest, throbbing partly out of anger but mostly from his pulsing desire.

Damned if he didn’t still want her in his arms. She made him feel like a teenager—and not in a good way. Vulnerable wasn’t a desired state of mind as far as he was concerned. He sat down with the adjoining door in full view, still unable to comprehend how he’d dropped his guard. How he seemed so willing to let down his defenses around her.

He’d panicked in the elevator, allowed himself to be captivated. He’d worried about her, touched her as if he cared. She’d kissed him back, moaned against his lips and his knees had gone weak. He could have made love to her right there in the lobby. He could care about her, and caring was the last thing he could afford to do.

Dammit. Naaki wasn’t a woman you got involved with on a whim. He needed, at all cost, to avoid her—the woman who’d so easily brought him to his knees, who’d caused his body to come alive and made him want—