Fellow Decadent Publishing author and my awesome editor from Decadent Publishing, Zee Monodee, has just released Book #1 of The Daimsbury Chronicles with Decadent. This books looks like fluffy, girly fun to read and I adore the cover. This is Book 1 in a brand new series with a category vibe. Set in the fictional Surrey village of Daimsbury in England, this is one place that will know a lot of upheavals of love and friendship *cue in soap opera plots!*

And it all starts with Honor Whelan's story, Bad Luck With Besties! 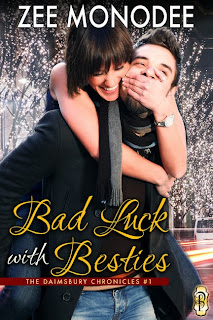 Honor Whelan always trips into bad luck with male best friends. Abandoned by her bestie of eleven years who got her pregnant during a one-night-stand, she finds herself destitute and alone, with no other choice but to head home to the Surrey village of Daimsbury.

Fifteen years earlier, Honor left Daimsbury because her then best friend and the boy she loved, Liam Morelli, got another friend pregnant.

Honor had run...but today, she can no longer hide. Especially not when fate knocks her straight into Liam's path, and he starts to show signs of wanting a second chance.

Will her luck finally change or will she continue to fight bad luck with besties?


She let her gaze travel to the dining table, bare except for the two white documents in stark contrast against the mahogany wood. Which one should she contemplate first? Not that she hadn’t spent the past three months pouring over them. Glancing at the papers shocked her with solid punch to the gut. Every single time.


What had she expected, really? Jonathan might have gotten her up the duff during one drunken night, yet he still remained totally gay. The flat and all its contents belonged to him. He wouldn’t get his hands on her book collection, that was for sure. Everything else, he’d ditched, like a person picked up a rotten sock with the barest pinch of fingers and tossed the smelly rag in the rubbish bin.


A flutter, akin to something pulling inside, started in her belly. She placed a hand on the spot where a baby grew in her. She could almost feel the kid calming from the touch. Doctors could say whatever they wanted; she knew her body. Her baby was alive and proud to exist. Why couldn’t Jonathan see that?


She sighed. Her gaze landed on the eviction papers. Her three months’ notice would run up tomorrow, and she no longer held hope that Jonathan would come round and tell her everything had been a mistake, that he hadn’t meant to eject her, and his child, out of his life and throw her out on her arse, to boot.


She’d been an idiot. The minute she’d confessed about her pregnancy, all shades of her best friend for the past eleven years had vanished. The cold, hard man she’d faced had turned tail and run to his former lover, the same one who had dumped him like a rotten sock, too. The most misogynistic bastard Honor had ever encountered. No wonder Jonathan, under his influence, sent her not only an eviction notice, but also the papers wherein he renounced all rights to the baby and requested she never bother him with anything pertaining to the child.


How could she have been so wrong about him? A tear rolled down her cheek. She should know, shouldn’t she, having an awful track record with male best friends. Hadn’t Liam Morelli gotten Rose Payne, the other member of their trinity, pregnant when they’d been seventeen?


And speaking of Liam. No, she couldn’t think of him. He’d returned to Daimsbury where she was headed, but no other choice lay before her. She had to go back, because the family house in that Surrey village was her only remaining possession.

Her book can be bought here: Decadent Publishing, Amazon
Posted by Kathy Bosman at Monday, November 25, 2013