2013 was a year of good and bad. I'm grateful to have come through some health challenges and scares mostly unscathed. I've had wonderful support from my family, especially my hubby whom I have fallen more deeply in love with than ever. He's so caring, giving and hardworking. I love him to bits!

I would honestly say it's been a fantastic year with my writing for the following reasons:

1. I had four books come out.
2. I signed two more contracts.
3. I wrote three books which isn't as much as the previous year but with new books out, I had to spend more time on promo.
4. Nano was wonderful. I love the book that I wrote for Nano.
5. My first book came out in print and now Three Tiers for Win is also out in print.
6. Astraea Press let me buy some of my print books at cost price.
7. I learned so much more from working with editors, especially Zee Monodee who is super-detailed and thorough and amazing.
8. I've learned so much about promo and come to a decision on how much time I want to dedicate to it in future.
9. I've started writing a different genre under a pseudonym.

For the New Year, I'm giving away a copy of Cosmetic Heart to a commenter on this blog post - answer the question below. The story begins in sunny South Africa just before Christmas, and the first time when Dan and Lisa start to feel for one another happens during New Year. My book has had some reviews which have given me reason to pause and even regret writing this book. But every time I feel so strongly that what I wrote was true. Maybe I didn't get the character across right though. When my husband asked to marry him, I made him wait six months. We had a stormy courtship and engagement because of my indecision and fear. Lisa is a lot like me. She has many barriers in her heart. I hope that whoever else reads my book sees that Dan's love is what wiped them away. Dan brought out the best in her as true love does. None of our characters are flawless. Some of them have to be lumped with some serious faults. Lisa is one of those characters.

Now for the question I'm burning to hear your answer for:

How flawed do you think a character should be to make them believable and likeable? Can a main character be too flawed as to be un-likeable?
Posted by Kathy Bosman at Tuesday, December 31, 2013 4 comments:

A Reader's Review of "Rescued by the New Guy in Town" 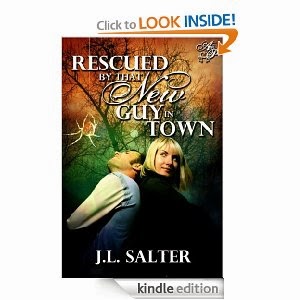 I won a copy of this ebook from a blog competition. I must admit, I was very excited to try the romance as it was written by a man. He is Jeff Salter, fellow Astraea Press author. This is another awesome Astraea Press book that I want to shout to the world - read it! It rocks! So, I decided to do a blog review of this book.

Most romance books are written by women. I very seldom find any written by men and when I do, I'm very curious to see how they handle the genre. No, Nicholas Sparks doesn't write romance. Well, very seldom does he. The author, Jeff Salter, worked as a librarian for many years. His colleagues were women. Rubbing shoulders with these females showed him many things about the gender. He bravely wrote this whole book from the heroine's point of view.

This novel was a breath of fresh air. It was absolutely fun to read. I would actually classify it more as a chic-lit romance. There was so much humour and craziness. I laughed out loud many times. My family kept on asking me what I was laughing at. The spider scene brought the tears to my eyes, I was laughing so bad.

Not only that, the story kept me going. The heroine seemed to find herself going from one mishap to the next. The sexual tension was good and the hero was yummy. The romance came full circle in a wonderful way.

Okay, it was written by a man who'd worked with women for many years but that didn't take away the definite male outlook to the romance. I saw it peeping through which made it a fascinating read. But, he managed to give insight into the female psyche that was superb and touched a chord with myself.

I'd recommend it to anyone who wants an entertaining and touching romance with depth inside.

E. A. West is organising a Book Blitz(en) giveaway of holiday books. At least Cosmetic Heart can be classified as a holiday book. Well, I think so. Dan wants his employee, Lisa, to pose as his ex-fiancee to save face with his family for a New Year's get together. In South Africa, New Year's Day means braai (barbecue,) lots of sunshine, and swimming. So, that's what Lisa takes part in. While she gets to know Dan away from work and spends time with his family, she begins to fall in love. Dan sees a side of Lisa that he wants, too. But there are way too many barriers to Lisa's whole heart. It's a long time before his love wipes them away.

If you enter the Book Blitzen Giveaway on E. A. West's blog, you can win a copy of my book or one of the many other gorgeous-looking holiday books. Here's the link: Book Blitzen Giveaway or just click the green block on the right of my blog with the happy moose. This giveaway starts today and ends on the 15 December. My book is up for grabs today, hence the blog post even though it's Nelson Mandela's Memorial.

I'm also going to have a giveaway of my book closer to New Year. Wait for it. And I'll run a giveaway of ALL of my books on my Facebook author page on the days leading up to Christmas.

Posted by Kathy Bosman at Tuesday, December 10, 2013 No comments:

Fellow ROSA member and writer, Rebecca Crowley, has just had her holiday romance released. She actually hails from the US but now lives in sunny, although lately very rainy, South Africa. This book looks so readable. Her debut novel, The Striker's Chance, was excellently written and I would recommend it so I'm sure her novella is wonderful, too, seeing she says it was truly written from her heart. She has also answered my interview questions, so let's start with that and then go onto all the juicy bits about her new book.


What is the best thing for you about being a writer?
Definitely my characters – I love getting into their heads, working up their back stories, and getting to know them as they grow through the story.

What is the hardest thing for you about being a writer?
This may sound funny considering I’ve had a very successful debut year, but I still struggle hugely with self-belief. Whenever I hit “send” on a submission I feel sick to my stomach, and I spend the period of waiting for a response constantly re-reading the manuscript, rethinking the conflict and prose, and generally convincing myself it’s the most terrible thing ever written. I think the ability to be self-critical is essential to producing publishable work, but equally I need to learn to give myself a little more credit!

What genre/s do you write and what genre is your latest release?
I primarily write contemporary romance, but my first romantic suspense will release in March.

What essential things have you learned about writing in the last year?
Considering it’s been almost exactly a year since my debut novel was acquired, I feel like I’ve learned everything! One of the most important lessons has been that you can’t please everyone – what one reader loves, another will hate, and there’s nothing you can do except write the story you want to read.

Who is your favourite heroine from your books and why?
I love all of my heroines and feel slightly traitorous picking one over the other, but my favourite is Regan Hunter, the professional tennis star who appears in Love in Straight Sets, my second sports romance releasing from Carina Press in April. Regan is so fiery and so flawed, and I love her dearly!

What type of hero do you like? Super alpha, wounded or somewhere in between? Or even something totally different? You could give an example from a movie or well-known book.
I’m not a great fan of the alpha hero, actually. I do like my heroes to be strong, but I also love to see their vulnerability and gentleness. Chris Tate, the hero of my holiday novella Hero’s Homecoming, is a perfect example. Blinded in combat, he’s gone from a confident, charming Army officer to needing so much help simply to get through each day that he questions the worth of his survival. Chris goes on a tremendous emotional journey that I’m so proud of having written.

Tell us about your journey in writing this book.
I was 15,000 words into 2012’s NaNoWriMo project and seriously flagging on my story idea. I spotted Carina Press’s call for holiday anthology submissions, one of which was a military homecoming theme. I started writing with very little idea and virtually no plan, and 35,000 words later I had a novella I’m so, so proud of and which marks a turning point in my maturity as a writer.

Tell us three quirky or interesting things about yourself.
Although I ultimately turned it down, at one point I was offered a place to do a PhD on romance novels.
When I was 24 I moved to London with the intention of living there for a year – I stayed for six!
After so many years taking public transportation in NYC and London, the biggest adjustment in moving to Johannesburg has definitely been the traffic!

What rituals do you use to help you focus or get the words down on the page e.g. music or a snack?
I prefer to write either with total quiet or white noise. Sometimes I write in front of the TV but it’s a terrible habit – I don’t get as many words down and I don’t absorb what I’m watching either! And I can’t write sex scenes without lots and lots of wine.

Mention something unique about your books and your writing style.
I’d like to think that my heroines are unique in that they’re fierce, flawed, and don’t always understand themselves or their own actions. They’re not perfect-perfect, and they know it.

What book would you like to work on next?
At the moment I’m working to finish my 2013 NaNoWriMo project, which is currently at about 53,000 words but probably has at least another 10,000 to go. It’s very quirky, with a hot Mormon hero – and no, it’s not inspirational!

Thank you so much, Rebecca. Your answers had me smiling and laughing!

HERO'S HOMECOMING is available on its own: Carina Press * Amazon * Amazon UK * Barnes & Noble * ARe * Audible

Or as part of the GIFTS OF HONOR duology: Carina Press * Amazon * Amazon UK * Barnes & Noble * ARe

Rebecca Crowley inherited her love of romance from her mom, who taught her to at least partially judge a book by the steaminess of its cover. She writes contemporary romance and romantic suspense with smart heroines and swoon-worthy heroes, and never tires of the happily-ever-after. Having pulled up her Kansas roots to live in New York City and London, Rebecca recently relocated to Johannesburg, South Africa.

Find her on the web at rebeccacrowley.net or on Twitter at @rachelmaybe.