They're such a vital part of the flow of a novel. I know because I used to be terrible at them. I don't know if I've got it mastered yet but I'm certainly working on it. Hence, this blog post.

There are two extremes when it comes to ending a scene and starting up a new one. The one is an info dump with long descriptions of the scenery, every smell and nuance, and a detailed inner monologue of the character's thoughts and feelings with plenty of past hurts, backstory, etc. The other one is like this: One minute your character experiences a heart-wrenching or stirring moment, the next they are in a totally different spot and you have no clue what they are doing, how many days later it is and what the emotions are. You go straight into a long dialogue scene and the reader is grasping for straws to know what's going on. A whole chunk of the character's life has totally blanked out like they've woken up from a coma. Now, the second one used to be my weakness. I still have to work on scene transitions purposefully because of it. Zee Monodee, my editor from Decadent Publishing, showed me this weakness. She used to say I must set the scene. I mean, don't you want your readers to enter into your character's world? How can they when you blank out huge chunks of their life? Yes, the readers are not interested in what they ate for breakfast or how long they took to brush their teeth, but we don't want to feel like something's missing, that we've lost touch with their story.

This becomes particularly difficult when you need to move the story forward several months. Eish!

Some books I read are choppy. You feel the scene breaks like the jerks on those swing rides at the amusement park. Others, you don't really notice the scene breaks as the story seems to morph from one scene to the next. Imagine you've just bought a new Mercedes Benz and have cruise control on a smooth, open road.

The transition should create a tiny pause to allow the reader to take in what's happened and think about the character's feelings. Almost like the Mercedes reaching a stop street but because of its smooth brakes and gear change, you hardly feel any jerk. You merely have a moment to take in your surroundings.

My goal is to be the Mercedes Benz, not the swing thing.

1. Skip the mundane things unless they add to the story. But don't eliminate the ones that are there to bring clarity and show who your character is as a person. Here is an example of unnecessary info:

Jane arrived home, dumped her bag by the front door and slammed the door shut. She picked up her mail on the telephone table. She opened each envelope and looked inside. Her electricity account needed to be paid and also her telephone account. She had a letter from her parents that should be replied to and some irritating advertising brochures. Besides that was a political leaflet of a candidate for the next local election. She read through them all, planning in her mind how she was going to spend her evening dealing with each one.

Okay, maybe the above example tells us a little about how Jane thinks but is it all necessary? I think this way would be better but I stand to be corrected.

Jane arrived home, dumped her bag by the front door and slammed the door shut. Mail was strewn on her telephone table. She glanced through the pile of envelopes, opening some. Argh! Mail just meant paying accounts and answering letters. Not something she had any energy for after the day she'd had.

Because I didn't go into too much detail, I could spend more time talking about how the events of her life affected her emotions and pulled the story forward. We're not really interested in what mail she received unless it's pivotal to her story. We're more interested in how the mail made her feel.

2. End a scene leaving the reader wanting more - either in the middle of difficult conflict, with a driving unknown, strong emotions (positive or negative,) or a cliffhanger. This is something that takes a lot of thought and planning. I'm working on it!

3. A good idea is to end with an action to create impact like: He brushed past her and slammed the door behind him. But if you're going to end the scene so abruptly, I would suggest creating a good setting for the next scene.

4. Choose the right spot to enter a scene. Don't come in right at the beginning if the beginning is boring. Start in the middle of a scene and cut to the chase.

5. You could create suspense between scenes by showing something that affects a character in one scene, have a totally different scene next and then the third scene, show their reaction.

6. When you start a new scene, make sure the reader knows whose point of view it's from (i.e. who is actually experiencing the moment,) where it's happening and how soon after the previous scene. You don't have to necessarily list this in a long sequence but offer clarity in the thoughts, description and dialogue. I always use a line break with asterisks to show a new scene and especially when you change the POV. There's nothing worse than being unsure of who's thoughts we're reading the book from.

7. If you do need to transition your character a large chunk of time forward, do it in a simple sentence like: Jenny stuck it out with her new job for several months and started to feel comfortable with her colleagues. When a new handsome manager come into work in early May, her comfort flew away like a butterfly out of its cocoon. We don't need to know what happened in those boring months when she was adapting to her new job. We only need to know her reaction when the new manager arrives. But you can't say that she obtained her job and then the new manager just arrives and she'd been working there a while already and knows everyone but he doesn't. The reader will wonder how she moved from newcomer to old hat in one moment.

8. You can use carefully chosen words to transition the scene well for example, Tammy handed him her letter of resignation, saying she was flying back home the next day. In the next scene, you could say, The flight back home was busy and tiring. Tammy moved her legs constantly to stop a cramp and tried to focus on a magazine the whole way but all she could think about was Myron's face when she handed him the letter of resignation.

Well, I certainly hope writing this post has helped me and you to make better scene transitions. Here's to a 2014 full of brilliant, top-class writing. 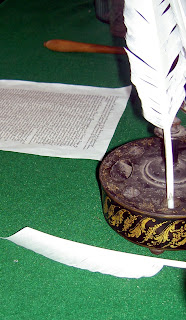