Thank you to Inge Saunders who tagged me in the character blog hop. She has two books coming out soon with the Ubuntu Line at Decadent Publishing. Here's a link to her character interview: http://ingesaunders.wordpress.com/2014/09/30/meet-the-character-damian-davidson/

First time author Inge Saunders fell in love with books was when she started reading romance novels with her grandmother. Intrigued by the worlds books unlocked, it was inevitable she would take pen to paper.
At age fourteen she wrote her first novel which wasn`t such a roaring success according to her brother. Not discouraged, she realized something fundamental: as a writer you can only write about what interests you, a principle she still upholds in adulthood.
When she`s not writing about that ‘inexplicable attraction’ she`s reading almost every sub-genre in romance out there, spending time with friends and family and taking hikes in her hometown`s National Karoo Park.
She`s forms part of Romance writers` Organization of South Africa (ROSA) and currently has two books under contract with Decadent Publishing, Falling for Mr. Unexpected (set to be released at the end of September 2014) and Dance of Love ( due later in 2014).
Blog: Inge Saunders - Inside These Lines 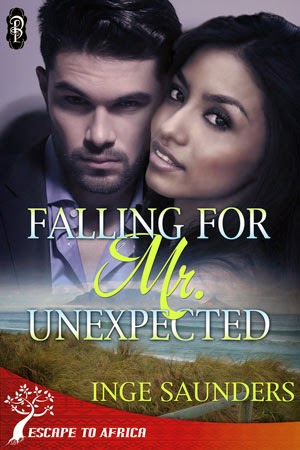 Can Emma fall for Mr. Unexpected when she doesn’t believe in Mr. Right or even Mr. Right Now…?
Primary school teacher Emma Cupido compares the notion of “The One,” with believing in the Tooth Fairy. When the school holidays starts, she heads for her brother-in-law`s beach house in Strand, South Africa and stumbles on more than she bargained for.
Hollywood heartthrob, Damian Davidson flees LA thinking his beach house in SA would be a safe hideout from his sex scandal. He’s had his fill of manipulative women and when he mistakes Emma for a crazy fan, all hell breaks loose.
Emma and Damian get off to a rocky start but first impressions can be deceiving. Is there more to Damian than the superficial taint of Hollywood? And what happens when she agrees to a trip to LA? Will Emma become a believer in “The One” or just another Hollywood scandal?

Now, for my character interview:

What is the name of your character? Is s/he fictional/historical?
Her name is Rowena Chisanga. She is purely fictional.

Rowena is Zambian by birth – just like my two youngest kids. But it’s also her culture and upbringing. Her mother has British origin and her father is Zambian. She’s grown up in a country with a wonderful culture but also steeped in difficulty and poverty. Her dream has always been ballet and to dance for a theatre, but because circumstances have come against her, she’s settled for second best – teaching ballet.

When and where is the story set?
The story is set mostly in Zambia but a small part occurs in Durban, South Africa.

What should we know about Rowena?
Rowena is an outgoing person, but she’s just lost her mother whom she was very close to, so she has some grief issues. She’s good with kid,s but because of her pain, lacks a bit of patience with her difficult student, Jamey. Rowena is super-fit with an athletic body and battles to keep her feet still. She’s a people’s person and good company. She’s young at heart, despite her difficulties and struggles. But she does hide secret pain.

What is Rowena`s goal?
Rowena runs her own business and wants to get the kids all ready for the ballet concert to encourage more clients to join. She has a secret dream of dancing for a ballet company but has put that dream aside because she doesn’t think it’s possible.

What is screwing up Rowena`s life (main conflict in writerly speak)?
Rowena’s just lost her best friend and mom so she’s lonely. She’s also having trouble teaching Jamey, one of her students. When Jamey’s father asks her for help to give her extra lessons, she starts to fall for him, but their cultures clash and Cameron is about to finish his work contract in Zambia very soon.

What is the title?
The Dance of the Firefly

I don’t have a cover yet. This should be coming out shortly, though. It’s with the Ubuntu Line with Decadent Publishing and is the second story in The Creators series.