Today, I have fellow Astraea Press regency and inspirational author, Heather Gray, talking about her new release, Queen. It's book 3 of her Regency Refuge series. 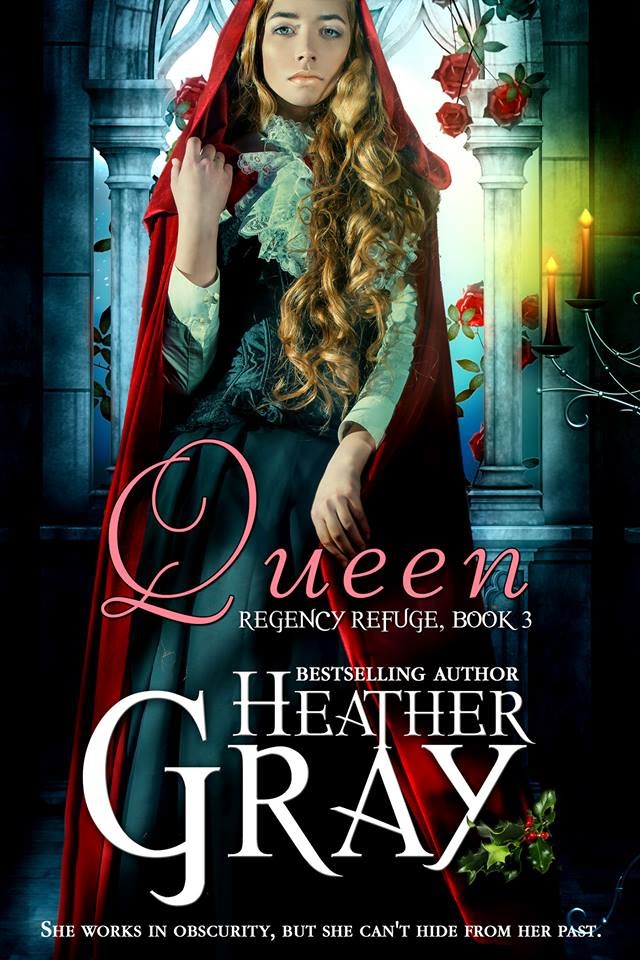 Back Cover Blurb:
You can't hide from the past.

Queen's world was shattered, and she was banished to a foreign land. Years pass before she dares to return, but what she finds is of little comfort. Greed and dishonesty have festered and grown in her absence. Embittered and cynical, Queen trusts few people.

Owen pursues a clandestine investigation and finds himself working side-by-side with a veritable ghost, an agent few have seen, a master of disguise known simply as Queen.  He craves her trust…but then uncovers a secret from his family's past that could destroy her.

Queen once sought refuge in America and now seeks it in disguise. Owen has always found his refuge in God, but will his faith be strong enough for the challenges ahead? Can he convince Queen to stop hiding, or is he doomed to become her most hated enemy?

Three days had passed since the beginning of his employment with Lady Rutherford. Owen stared at the ledgers spread out across the considerable breadth of the walnut desk and blinked slowly. By jove, I think I'm on to something here. At the sound of approaching feet, he closed the ledger and picked up some of the late viscount's correspondence.

The housemaid shuffled in then. "I'm here to stoke the fire, Mr. Lobbing."

"Go ahead. By the by, can you tell me your name? I keep forgetting to ask."

She bobbed her head and gave a half-curtsy. "Isadore."

"I'm pleased to meet you, Isadore."

He chuckled. "Of course, but we've not been introduced until this moment."

She gave him an odd look and went about her business with the fireplace. He'd not seen her the last couple of days, and according to Chambers, she'd been punished for some infraction and assigned scullery duties. The butler hadn't been forthcoming about the infraction, so Owen had been left wondering.

"It's good to see you out and about again, Isadore. The footman did a passable job with my fire, but he's not nearly as efficient as you."

She glanced at him with wide eyes before she dropped her gaze back to her task. Once she was done with the fire, she took a step toward the door, but her foot caught on the edge of a rug. Time slowed. Isadore lurched to her right then overcorrected and stumbled wildly to her left until her feet became tangled up in the legs of a globe stand. The globe teetered, its position precarious, and Owen jumped to rescue it. Neither of their jobs would be secure if something happened to the globe, and he had a feeling Isadore didn't have many employment choices.

Isadore, in fighting to get her feet free, finally sent the globe stand toppling onto its side. The globe tumbled out, striking the floor before Owen could get a hand on it. He helped Isadore to her feet and found his eyes drawn to her blue ones in the most peculiar way. Owen turned his back to her and set the globe's stand to rights again. Then he reached for the globe, but Isadore must not have been quite steady on her feet yet, for her foot slipped past him and kicked the the spherical object before she regained her footing.

"I'm so sorry, Mr. Lobbing. Do you think it's damaged? I can't get in trouble again, I jus' can't."
Owen glanced from Isadore to the globe. It had made a sound when rolling that last little bit. "I'm sure it's fine. You'd best be on your way."

He picked up the globe and examined it. Much to Owen's relief, the sphere remained unbroken. Isadore did not need more trouble with her employer. Waiting until the maid was out the door, he shook the globe. A definite clank met his ears. Owen ran his fingers across the globe's entire surface. A compartment had to be hidden within. Sure enough, over the western part of the colonies along one of the seams, a slight irregularity could be felt along the surface, nothing more than a small bump. Firm pressure from his fingers, and he heard a satisfying click. The globe came apart in his hands.

Heather Gray authors the Ladies of Larkspur inspirational western romance series, including Mail Order Man, Just Dessert, and Redemption.  She also writes the Regency Refuge series: His Saving Grace, Jackal, and Queen - plus contemporary titles Ten Million Reasons and Nowhere for Christmas.  Aside from a long-standing love affair with coffee, Heather’s greatest joys are her relationships with her Savior and family.  Heather loves to laugh, and this theme is prevalent in her writing where, through the highs and lows of life, her characters find a way to love God, embrace each day, and laugh out loud right along with her.