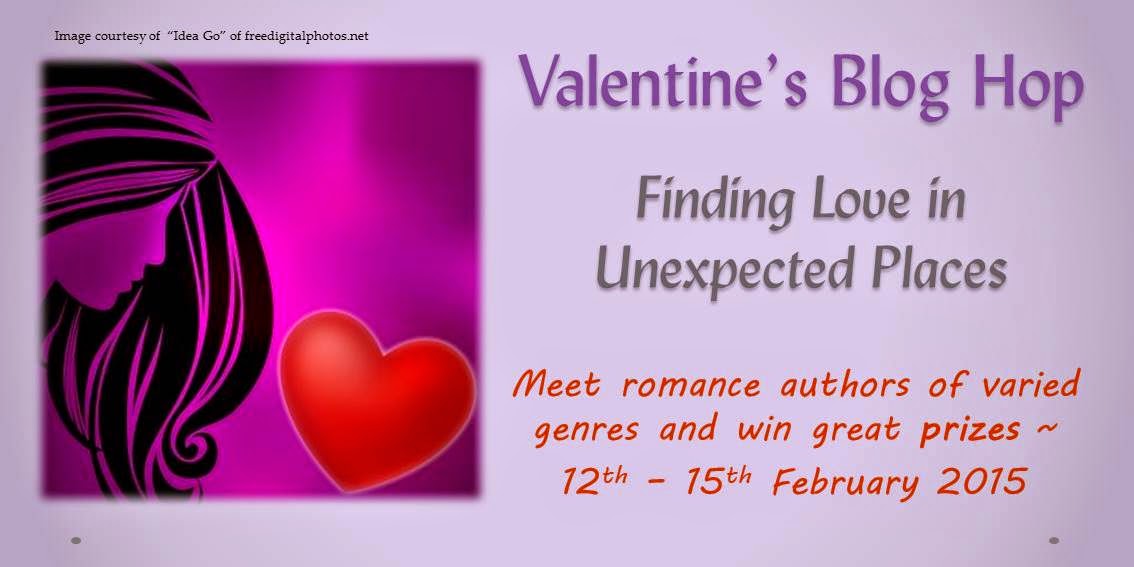 For Valentine's Day this year, a group of South African romance writers have gotten together to share about our books and about love. Our theme is finding love in unexpected places.

Have you ever found love in an unexpected place?

I couldn't really say that I found love in an unexpected place. At the time I met my husband, I was very involved in the contemporary church scene. Most, if not all the people I hung around with, belonged to the church. And that's where I met Kevin. We both noticed each other along the same aisle, and one time, we had to hold hands for prayer and I was sitting next to him. Kind of enjoyed that moment. He really did do something unexpected - he offered me a lift and pretty much didn't let me go after that even when I made things really difficult for him.

In my new release which comes out tomorrow, Cameron and Rowena find love in unexpected places. Or could I say at a seemingly inopportune time. Cameron is still grieving his late wife. He's working in Zambia on a short work contract. He's certainly not looking for love, but when he watches his daughter's ballet teacher dance, something stirs in his soul. She's beautiful just like his late ballerina wife, but in a different way - in a raw, real, emotional way.

Rowena's certainly not looking for love. Specially in the father who criticizes her for shouting at his difficult daughter who's her most difficult student. When she finds out that Jamey doesn't have a mom, compassion fills her. A bond soon forms between the young child and her teacher - more than just a teacherly bond. Cameron sees the way Rowena is with his daughter and wants to run a mile. He's worried his daughter's going to have her heart broken when he leaves Zambia soon.

Here's a quick snippet from the book. To keep to the Valentine's theme, I've put in an excerpt of the first kiss:

“You disappeared.” Rowena stood there dripping, goose bumps on her arms. Her lips were tinged blue, but her eyes shone. Water dripped off her nose, and for a moment, he wished to kiss her but held back.
“I couldn’t stand here watching you having fun like a real stick-in-the-mud.”
“Daddy, Daddy, it’s such fun. It gets really fast near the end, and the water sprays up all over your face, and you think you’re going to flip onto your stomach as the last few bends are very windy. But it’s so cool. Let’s go.”
They all walked up the steep path to the ride, and a few butterflies fluttered in his stomach. Okay, he’d been quite adventurous when younger, but it had been years since he’d done anything physical like this, where he lost control of his senses and movements. Rowena was used to physical challenges being a dancer. Don’t be such a wuss.
Once he’d stepped into the rushing water after Jamey, the ride took over, and he yelled as he dipped and swayed. Rowena laughed in response. The cold water spiked his heartbeat. I haven’t had so much fun in years.
Once in the pool, he waded up to them. “How awesome.”
“Want to go again, Daddy?”
“Of course.”
Up they went again. They took the ride ten times before Cameron began to feel exhausted. He wasn’t young like Jamey, nor fit like Rowena.
“I’ll wait here for you. You both go ahead,” he said.
“You sure?”
“I’m pooped. We’d better start heading home soon as it’s getting quite cool and there’s a bit of a drive.”
“Aah,” Jamey said.
“We could come another time,” he added.
“Could we? This was the funnest day I’ve ever had.”
He laughed and squeezed her cheek. Rowena smiled at him, her gentle eyes alight with goodness. He took in her clear complexion, the light brown flecks in her eyes. Her mouth was full, pink, and ripe to be touched. He moved forward to kiss her, ignoring the consequences. She pulled away slightly, but he grabbed her by the waist and gently tugged her toward him. Finding her beautiful mouth, he pressed his lightly against it and breathed in her scent mixed with water and sun cream. Her lips were gloriously soft and pliable, and her form against him brought long-lost sensations back to life. For a moment, she responded and kissed him back then Jamey shouted.
“What you doing, Daddy? Aren’t we going on a ride?”
The spell broke. He pulled away, the implications of what he’d done crashing down on his head. He glanced at Rowena, but she’d already turned away and followed Jamey up the path. What had he done? What did Jamey think? Would Rowena back off now? She was his daughter’s ballet teacher. Since when had he been overcome with such impulsiveness? Even with Samantha, it had taken months before he’d made a move on her, all the while wondering if such a stunning creature would ever go for him. With Rowena, he hadn’t had time to think. The compulsion to kiss her, to feel her, and connect with her had been overpowering.
He sank back into the water and ducked his head under, hoping to hide his embarrassment. Good thing the pool had emptied by the late hour. Maybe not good, because he couldn’t hide in a crowd. Holding his breath, he swam through the shallow water, touching the bottom with his fingertips. He had to pretend nothing had happened, pretend this new longing inside of him didn’t exist. Their relationship wouldn’t work. He’d end up hurting her, and she couldn’t suffer another pain now, with the recent loss of her mother. He could tell the woman had been deeply attached to her mom. His body shook with the cold, so he resurfaced. The sun had gone behind a cloud. Time to go home. Time to get on with life and forget the fun of today, the escape from all the burdens he’d experienced, for the first time in over a year.
Time to be a real man and take responsibility.
Annoyingly though, he could still taste her, and her scent seemed to be glued to the inside of his nose.

You can buy The Dance of the Firefly here:

To take part in the giveaway and win some awesome prizes, you can comment below or on any of the other blogs for the hop. (Please don't forget to put in your email address so we can contact you if you win.) I'm giving away book 1 of The Creators. The Dance of the Firefly is Book 2. Here are the prizes:


The prize winners will be announced on our blogs on the 15th and on Facebook.

Here are the links to the other blogs. The more blogs you stop by and comment on, the more chances you have to win.