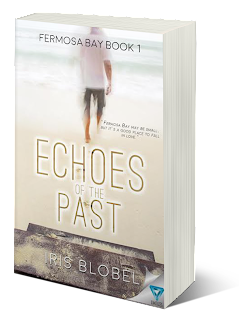 When her childhood friend, Connor Walsh, returns home to see his ailing father, Emily is elated to be reunited with the handsome man who moved to London so many years ago. But excitement fades to disappointment when he doesn’t remember her—or their first kiss. With her crush on Connor still in full swing, she’s determined to enjoy the short time he’s in Fermosa Bay, even though she knows her heart will break when he returns to his life in London.

When Connor receives news that his biological father is terminally ill, he returns to Fermosa Bay, Australia.

With memories of his childhood tucked fondly in the back of his mind, returning to the small, coastal town leaves him to wonder how life would have been if his mother had never taken him away. Would he have been married and had children? Perhaps with Emily Bradshaw…

Secrets from long ago begin to unfold…

As Connor and his father grow closer, Connor learns his parents have a broken love story of their own. Will the echoes of the past lure him into staying, maybe for good? Or will he relive his parents’ tragic story and flee to London?

Walking away from a real chance at true love…

Iris Blobel was born and raised in Germany and only immigrated to Australia in the late 1990s. Having had the travel bug most of her life, Iris spent quite some time living in Scotland, London as well as Canada where she met her husband. Her love for putting her stories onto paper has only emerged recently, but now her laptop is a constant companion.

Iris resides west of Melbourne with her husband and her two beautiful daughters.

Next to her job at a private school, she also presents a German Program at the local Community Radio.

What’s your favourite part of the day? Morning, afternoon or night?
Good Question. I've never really thought about it before. I’d say since I’ve been back in Fermosa Bay in Australia, waking up early to see the sunrise is well worth it.

What is your motto in life?
“Trust in people, don’t judge” … well, it’s my new motto since arriving back in Fermosa Bay.

Name one of your weaknesses that you’d like to work on.
Trust.

What question would you like to ask your creator?
Why did you have to bring my ex-girlfriend into the story?

If you could do anything over again in the book, what would it be?
Re-connect with my dad earlier.

Give a memory from childhood.
See … I’m still trying to remember anything from my childhood. It’s all tucked away in the back of my mind. But listening to Dad, Emily, Ethan, and Niall, it must’ve been great. Hopefully one day I will be able to answer this question. I’m working on it.

Is there anything you’ve always secretly wished for but isn’t mentioned in the book?
To have attended a local school around the corner from mum and her husband. A dog greeting me when I got home … and perhaps some holidays once in a while.

If you could commission a painting from a famous artist, what would it be of?
“Irises” from van Gogh

What’s your most embarrassing moment?
They locked me out in boarding school …. I was naked.

What do you prefer? Rock, classical, jazz, country or other?
Rock.

Thank you for sharing. Connor sounds like a fascinating character!
Posted by Kathy Bosman at Thursday, March 24, 2016

Email ThisBlogThis!Share to TwitterShare to FacebookShare to Pinterest
Labels: Echoes of the Past, iris blobel, Limitless Press