Happy Release Day to Me!

Today my last album book is out! I can't believe the series is over. I'm feeling satisfied and a little sad. It really was such fun to write. I loved carrying the same characters forward to each book. I loved the friendship between the four friends and how they helped each other through their difficult times and their adventures. I loved the romances. It was such a satisfying series to write.

I'm so grateful to my editor, Zee Monodee, who was thorough in making sure my characters and stories shine. And the way she picks up sentence structure and grammar in such a simple way without cluttering the editing process. Thanks, Zee, you're a pleasure to work with and a great friend.

So, partly, I'm sad that the series is over, but I'm also excited about a new idea that's brewing in my mind and heart. Because I enjoyed the women's fiction side of The Album series - the idea of woman friends helping one another and the dynamics of their relationships, I'm looking at working on a woman's fiction novel next. It will have a bit of romance in it, but that won't be the main theme. This book will be about three woman who get together to do something special. Each of them are in a bit of a crisis in their lives and they're there for each other. In the story, they grow and become the people they were meant to be.

Anyway, when I read through The Album 4, I felt quite emotional. Because of my painful divorce, which I definitely did not expect to happen at all, I could so identify with Andrea, the heroine in my book who's been hurt by past relationships and break-ups. Trent brought such healing into her life, but she had to follow her gut feel and trust that they'd work as a couple. I've been thinking about having to find another man one day and it's been stressing me a bit. I was cautious in marrying my first husband. I can imagine I'll be worse second time around. So, I'll need a little bit of encouragement from Andrea to take the plunge one day. :) Oh, if only I could use The Album's magic to tell me whether the relationship would work.

In some ways the series isn't over yet. I have a short story coming out in an anthology (a group of short stories by several authors). If you've read The Album 3 and are going to read The Album 4, you'll remember Bridget. Well, this is her story. I will go into more detail in another post as I think I've gone on long enough. 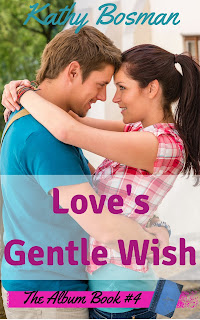 
Carol stashed The Album into Andrea Reave's handbag, much to her dismay. The magic scares her so she promptly ignores the artefact. Andrea is not in a good place. Instead of the promotion she’s been working toward for years, she’s been let off and is now without work. When she’s offered two part-time jobs, she has no option but to take them. Pity the one job means she will have to confront the very thing that makes her fear losing control - magic. Now, she’ll have to work with other people who’ve encountered magic first hand. And it turns out, the woman she will work with has a cute son, just the type of guy she wouldn’t go for, but one she can’t ignore. Enter Trent Dublin, arty-farty, casual as anything, and too jolly chivalrous for his own good.


Just as she comes up for air, her aunt and uncle pass away, making her the legal guardian of her teenage niece, Lucy. When she brings Lucy home, she doesn’t realise how much the girl’s grief affects her and those around her. Trent proves to be more than a friend in a time of need, but Andrea doesn’t do romance. She's never been good at making it work with a man. Why would it be any different with Trent, no matter how attractive and kind he is? Could magic heal Andrea's jaded heart? Or is it too late?


Sighing, she found the path to the studio and knocked on the open door.
“Yo,” he yelled in his deep, bellowing voice.
She tiptoed in, her high-heel shoe straps still hanging from her fingers.
Large, bold, colourful canvases filled every wall. The overpowering smell of paint, dust, wood, and mustiness met her nostrils. She coughed.
Trent came up to her, his smile so gentle and beautiful, she had to swallow. How could a man be beautiful? They were supposed to be tough and strong and able to handle everything that came their way. She’d always been attracted to the professional, CEO type, not to a pretty boy.
“Can you let me out?”
“Leaving so soon?”
He seemed amused again. Did everything about her amuse him?
“I’m coming back. I’m moving into the granny flat. At the bottom of the garden.” She sent a clumsy hand in the direction of the miniature house she’d noticed on her way up. He must have seen the deep blush that heated her face because he stared at her.
“Oh.” That sounded odd. “That’s nice,” came out half-hearted.
He didn’t sound so sure that her living here would be a good thing. She supposed she hadn’t been very polite to him in the past.
“Don’t worry. I won’t get in your way,” she muttered.
He pressed her gently on the small of her back to lead her back to the house. His touch sent shivers through her. Gripping her arms around her stomach, she tried to act nonchalant and moved away from him.
“I’m sure you won’t get in my way.” He laughed. “Unless you want to try art and take over my studio.”
“Most definitely not.” She whipped her head around to glare at him. “I can’t even draw a stick figure.”
“That’s what they all say.” He shook his head and sighed.
She continued to glare at him. “Don’t even think of making me get into art. It’s never been my thing.”
“Fine.” He held up his hands in self-defence. “I won’t ever mention it again.”
Had she hurt him? But the amused smile on his face told her otherwise.
The guy was so irritating and relaxed. Did nothing ever faze him? Was she just a joke in his eyes? Had her previous rudeness put him on the defensive with her? It wasn’t right that the thought bothered her so much.


She’d agreed to live here now because of financial desperation, but would it be a good move for her soul to see him all the time and know he didn’t like her? Why did I agree to stay here? Rose gardening aside, it was a stupid idea.