Second Edition Reminding Me of You

The second book I ever got published is now out again - edited and with added scenes. I've learned so much about writing since then and I wanted to make my novella juicier and more grounded - it was a bit flighty first time round.

And the new cover is so stunning! 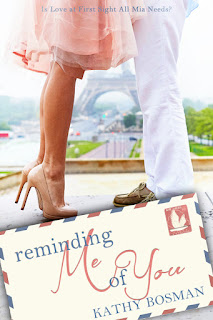 
On Valentine’s Day, the day before Mia is to travel to London to start afresh, she meets the dark and mysterious stranger, Luke, in her friend’s card shop. He asks her to help him write a Valentine’s Day Card for his girlfriend. Then he disappears. Mia has fallen in love with him at first sight and can’t help thinking about him, but she’s planned to live in London for a while to experience the world. Once in London, she discovers that Luke had written the card for her. Her feelings for this romantic man deepen, but how can she pursue anything when she lives across the ocean and has no idea how to find him again? When she meets Bryn, a Welsh, Luke-look-alike, they travel to Paris together and strike up a friendship due to their shared loss of a love-at-first-sight romance. Feelings between Mia and Bryn blossom in the city of lights, but Mia can’t forget the “card guy.” What will Mia do when she finally gets his email address? Pursue the budding relationship with Bryn or follow her heart and find the guy who’d made her fall in love at first sight?

The sleek train proved a luxury to ride in and they reached the Museum of Modern Art in minutes. Bryn paid the entrance fee and they walked into a bright, upbeat place that, although not as elaborate and classic as the Louvre, proved to be a real treat.
Bryn led her around and showed her things as though he knew the place. It felt like a surprise to discover a place she wouldn’t have dreamed of visiting on her weekend Paris trip, and leaving Polly and Donald behind felt almost clandestine.
“Here’s Matisse,” he finally said as they reached the section with her art idol’s works. She walked around from painting to painting, wondering if she could capture the memory of the moment for later on, but felt rather inadequate. Bryn sat on a bench, watching her with interest.
“You don’t like Matisse then?” she asked, feeling bad about leading him on a detour.
“I can see something magical about his work. I like to sit and take them in all at once, not focus on one painting at a time. I’d love to get inside his head and see how he evolved as a painter and artist in his life. What inspired him, what drove him.”
She sat next to him. “That’s such a deep thought.”
“When you reach your thirties, you see how you’ve changed over the years—how your passions and desires have morphed. I also wonder what transition or transformation famous artists like Matisse go through. You can see his style has changed. As he aged, the colors in his paintings became deeper, richer almost. And his lines less defined, the human figures less generic. Like, when you’re younger, you’re so certain about things and seem to follow the crowd, but as you mature, the more you know, the more you realize, the less you know. And the more individualistic you become in your mindset.”
Mia couldn’t help snuggling up against him, her thigh touching his firm, manly one. She wanted to drink in his philosophical thoughts. The man put her to shame by highlighting her shallowness, but deep inside, she resonated with what he said. It made sense. So, maybe she wasn’t so shallow. Hadn’t she only ever been with mostly shallow men? It was as if they’d only touched the surface of life and emotions with her.
“I love the way you analyze the art. It makes it so much more meaningful.” She rested her head against his arm, unable to resist the close contact. He wrapped his arm around her and pulled her close into the nook between his arm and chest. He didn’t bend to kiss her. It was as if he knew the timing didn’t work now. The moment was a thoughtful one—soaking in the atmosphere of the place, the beauty and majesty of a truly talented person’s life displayed before them, and he sensed that. Also, she couldn’t help drinking in Bryn’s energy through his contact. She felt a strength from him, a wisdom beyond his age, and she considered herself deeply privileged to have met someone like him.
A noisy crowd comprising several families with young kids broke the contemplative silence. Bryn pulled away, stretched, and walked with a limp to one of the paintings. She stared at him, shocked at the path which her thoughts had tread. Since when did she go for deep yet funny elf-like men? Ones who limped and spent so long choosing flowers for their mum? Had his similarity to Luke taken away her common sense? She walked to a Matisse painting and pretended to study it, but all she could think about was how it felt in his arms. And how the depths of her crush didn’t make sense at all.

You can purchase here: