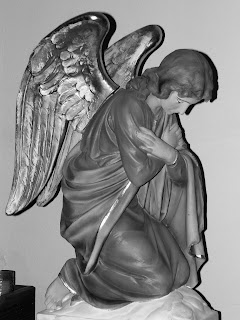 I have a release date for my fantasy novel. I'm so excited about this book! And I can't wait until I receive the cover!

The book has been edited now so we're just waiting for release day. It is...

Ooh, full of sevens. I like the number seven.


Essa sprouts wings on her back whenever she suffers the deepest grief. The love of her life has just left her without a solid reason. She’s flung into the depths of sorrow, unable to deal with her grief and the added stress of wings on her back which only she can see. She has to get out her apartment so she takes a walk along the streets of Boston at night. To her surprise, her wings come to life when she finds herself fighting against an evil spirit set on destroying a man’s life. By pure instinct and some special light within her, she saves his life and is flung into a whole new world. Suddenly, she’s an angeline, a hybrid human/angel and she’s part of a team of warriors who need to save the city of Boston. And they’re all depending on inexperienced her as she’s the only one with wings. But is Essa ready for the evil that awaits her? And can she really fight a battle when her heart is filled with pain?


I wanted to share an excerpt from the novel to give you a taste of what's to come. I hope you enjoy.


The sobs came as I rushed to the bathroom to hurl.
After emptying what little remained in my stomach from breakfast, I looked up at the mirror as I washed my hands, not too keen to see the lost, broken look in my eyes.
I gasped.
I’d forgotten what could happen.
“No-o-o-o,” I rasped out.
It only happened during times of deep pain or grief.
Had Darrick hurt me that much?
I usually never felt anything in my body at first. The wings would appear in spiritual form in the beginning, but my third eye would see them. Only after several minutes, would I sense the gentle tug on the muscles of my back. Then the pure white, expansive structures would pop out of my skin and spread out behind me. As majestic as they looked, I braced myself for the way my life would change for the next however many months until my intense internal pain subsided. Not that everyone could see that I had angel wings. Only a few individuals had ever noticed—usually people like psychics, energy healers, spiritual nurturers—those who’d opened up to the spiritual plane. But no one had been able to explain what it meant, what I was, and why.
Shudders rippled through me, different from the trembling brought on by Darrick’s lack of love confession. Power entered my being; light filled the hidden expanses of my soul. Gasping, I braced myself for the transformation that would take over my being. It wouldn’t take away the pain, but it buoyed me and filled me with something inexplicable, a sense of purpose, and a feeling of pure exhilaration. How I could feel crippling emotional devastation and this new energy surging through me at the same time, I couldn’t explain. Nothing made sense.
As the metamorphosis came to an end, I stared at myself in the mirror. My eyes had a piercing nature about them, their blueness now stark and sharp like a blue diamond with many facets. I reached back to touch my wings, relishing the silky softness of each feather, thickly layered upon bone, sinew, and raw power.
My body seemed to stand more erect, I looked proud and powerful, and yet I’d never felt such heart-crippling despair. For this meant my breakup pain was intense. It meant it would last for months, and it also meant I’d have to avoid being questioned by the spiritual people who noticed my odd form. And the questions would come flooding back, the unanswered ones that kept attacking my mind: Why am I like this? What exactly am I? Why does this happen whenever I’m grieving?
It had happened twice before—the day my mother left and never came back, the terrifying week my father got deathly ill and lost his life, and now, today, when the man I loved and wanted to spend the rest of my life with had quite coldly told me he didn’t love me anymore without a valid reason.
Loneliness, as wicked as the creature I’d seen in the elevator, pierced my gut, making my chest burn. I gasped for breath. The world didn’t want me. I didn’t belong here. Not a soul cared. Who could I tell that my heart had been broken by the man I loved? Or that I had wings the size of two massive kites on my back?