Every now and then, I like to post something personal in my blog just because writing is cathartic to me. So, here goes:

Being single at 46 poses quite a challenge. I certainly feel more fulfilled having someone in my life, so I've embarked on a new adventure - dating.

Even though it's only been a few months, I've already experienced quite an array of strange characters and situations. Because I work from home, online dating looks like the most immediate option, but I've come to the conclusion it's not easy because you really don't know what you're dealing with. And first dates are as scary as job interviews!! These are a couple of the crazy people I've met:

1. A man who told me we were fated together and after a few weeks, asks me for my bank account details. (Good thing I didn't take his flattery very seriously.)

2. A man who confessed to being married, but still "wanted to have fun." When I asked him what his wife would think, he said, "she does the same."

3. Another one who asked for a naked pic before we'd even met. Sigh...

4. Several from overseas who insisted that they visit my country sometimes and may be able to see me. (Really?) And I expressly said on my profile - only those who live in my city. Don't they read the fine print?

Today, I saw this really cute video which epitomizes the helpless feeling sometimes - the "when am I going to find this person who ticks all my boxes?" If you have time, you will love this:

I went on another date today and came home really confused. I mean, he was nice in so many ways - he even thinks like me in several very important aspects, but I just didn't like him. Like, what's wrong with me? He's a good man, or so it seems. And apparently, according to what I've heard, the good men at my age are usually taken already. So, don't pass him up, I've been told.

Sometimes when we feel really down, God / the universe (or whatever you believe) gives us a clear message. Today, I got the same message twice in a different form. The first one was "effortless" -letting things just flow naturally. I've been trying way too hard. The second one was "surrender" - that if we hold onto something or want something so badly, we make it worse. We must just let go and let God.

I'm actually fascinated by the fact that the book I'm writing at the moment is about a woman who thinks she has to settle for the good guy because he seems just right (in theory) and the one she really wants seems bad for her. Little does she realise (until later on in the book) that the man she can't resist actually does have a heart of gold.

He covered her cheeks with his palms and pressed his lips to hers. She felt the touch of his clean-shaven cheek. His mouth was smooth and soft, and he deepened the kiss. She waited for it—the fireworks, the undeniable pull, the irresistible lust that she’d experienced with Jeff. Nothing. He kissed longer and sought her tongue. Reluctantly she gave hers. As their tongues touched, she felt a twinge of something light up within her so she tucked up closer to him. He took that as an invitation to wrap her into an embrace. It felt comforting, nice actually. Just what she needed—safe and nice. Then he pulled away. She gave a shy smile.
“Good-night, Cherry.”
With an awkward stoop of his shoulders, he walked away and got into his car, not before offering a small wave and sheepish grin. Cherry waved back and slipped inside, locking the door behind her. Maisy waited for her at the door. She picked up the cat and snuggled her against her cheek. The feline sniffed her mouth, making her giggle. “Ah, so you can scent a man on me.”
Maisy purred. “Do you think he’s a good man?”


She answered with a small mew. If only cats could give life-altering advice. Suppose she had time. No rush for the feelings to arrive. They would in time. Seb seemed like the perfect man. Everything he’d told her today matched up with her criteria for the love of her life. Maybe the hurt from the past was holding her back from giving her all. If she learned to trust, she would eventually open up to his love, like the lotus flower.
Posted by Kathy Bosman at Thursday, April 27, 2017 5 comments:

Snuggle in with Sweet Romance 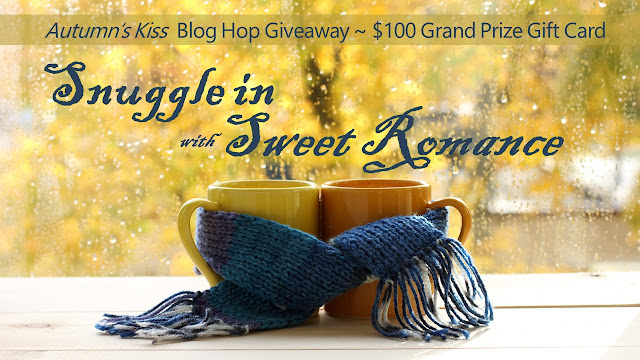 When it’s chilly outside, Snuggle In with Sweet Romance!

No matter where you are in the world, be it autumn breezes in the southern hemisphere or spring rains in the north, the weather these days is unpredictable, often chilly and wet.
How do you get comfortable on those cold and rainy days? You might curl up with a good book, a hot chocolate, and a nice warm blanket to snuggle under. What good book can I recommend?
AUTUMN’S KISS! 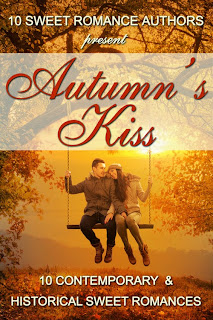 The AUTUMN’S KISS anthology presents a variety of stories by sweet romance authors from around the globe and gives you an opportunity to discover some new favorites.
While romance readers in the southern hemisphere are enjoying autumn, 6 authors from the AUTUMN’S KISS anthology have teamed up to share recipes for their favorite comfort foods and invite you to share in the bounty!
Join the AUTUMN’S KISS Blog Hop!
Many Chances for You to Win!
·        First, each blog in the hop provides a chance to win prizes direct from each author.
·        Second, visit every blog and you can be eligible for the $100 Grand Prize drawing or one of the runner-up prizes. 4 winners in all!
1 GRAND PRIZE WINNERS: $100 Amazon Gift Card
1 FIRST PRIZE WINNER: $20 Amazon Gift Card
2 SECOND PRIZE WINNERS: FREE Autumn’s Kiss eBook

My Comfort Food Recipe for Snuggling Up - I hope you enjoy!

Just the other day, a cold spell hit us. Yes, that's pretty relative where I live. I've just moved down to the coast where we enjoy a warm, subtropical climate, so cold is really cool. But it still gets the hunger bugs churning in the tummies. I was craving cream of tomato soup - the homemade kind, not the store-bought, synthetic kind. So, I found and adapted a recipe to make and it turned out delicious! What I liked about the recipe is that it didn't take hours to prepare so I could satisfy my craving pretty quickly.

2 teaspoons sugar (optional - it just cuts the sharp, acidic taste)
3 cups chicken broth (more to thin out the soup at the end as needed)
½ teaspoon dried thyme
Salt and pepper to taste
1 28-ounce can whole tomatoes (I used about 7 fresh ones and blanched and pealed them)
½ cup cream

Fry the carrots, onion, and garlic in the pan for 5-10 minutes until the vegetables are tender.

Puree the tomatoes. Add the broth, thyme, salt and pepper, and tomatoes to the soup pot. Simmer for 30 minutes. Puree in batches and return to the pot. Add cream and reheat. Serve with buttered toast fingers.

For those who visit my blog, I'm offering the prize of all FOUR sweet romance e-books from my Album series: 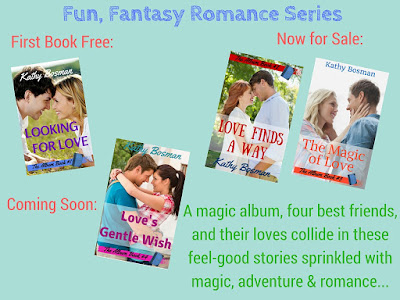 Please note: You will not be entered to win this prize unless you comment on this blog post AND provide your email address!

Good luck and thank you so much for taking part!

To enter the giveaway, you need to fill in this form. Find the other blog links below. Just click on the little blue froggy link.

Spotlight on Cathy Padilla's A Taste for Love

Today, I want to welcome fellow Clean Reads author, Cathy Padilla, to my blog. She's talking about her sweet romance, A Taste for Love. 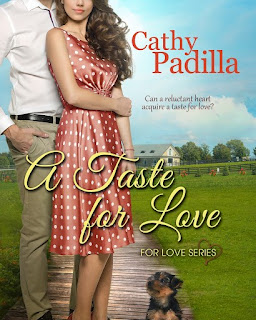 A Taste for Love

A Clean Romance, by Cathy Padilla

Sarah Texmara runs The Club, an upscale country club at the Jersey Shore, with the same planned determination she guards her wounded heart. Having made the decision to avoid love at all cost, she finds herself blackmailed into an engagement to save her father and the very thing he has valued more than her mother's love – the family land that houses the country club. At the moment she finally resigns herself to her fate Sarah is caught off guard by the dashingly handsome Luke Patterson. Sarah needs to choose between her own desires or protecting a long covered family scandal, all while learning that love is sometimes worth the risk.

Luke Patterson is a skilled investigator with his own secret to protect. What started as a favor for a family-friend turns into a race against the clock to save the woman he loves from sacrificing her existence to a man seeking to destroy her family's legacy and possess her inheritance. He can keep her from danger, he has captured her desire, but will he be able to help her overcome her fear of true love?

Can Sarah and Luke find the answers to their needs together?

You can connect with Cathy here:

http://4love.club/index.html
Posted by Kathy Bosman at Tuesday, April 18, 2017 No comments: