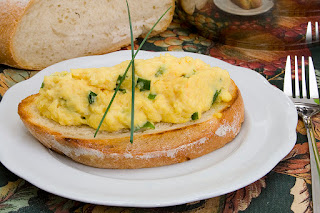 For the last fourteen months or so, we've been eating primal/paleo which means eggs for breakfast every morning. I've learned to cook a large variety of egg meals. One of the easiest and most versatile is scrambled eggs. I've also learned the trick of not making rubbery scrambled eggs. The trick is: low and slow. As soon as you up the temperature, it turns into hard, rubbery balls. But it takes time and patience. I have to start at least twenty minutes before my husband comes through for his breakfast else it won't be ready.

I'm learning that sometimes writing is like scrambled eggs. I'm an impatient person. I like things done and achieved here and now. It's been a whirlwind year for me. In the space of about nine months, I signed five publishing contracts. I'm used to fast and furious. But it's not working with my writing at the moment. I need to ease my breath, sit down and ponder. Ponder, stew and stir. Talk about stew: the low and slow ones always taste better. I'm making stew for supper tonight. I have a recipe that takes about four hours to make, but oh, what a difference to the meat. It drops off the bone into soft, juicy pieces instead of being so hard you break your ten-year old fillings on it. (The red wine in the recipe helps too.)

A writing mentor said something valuable a short while back when I was struggling with sticking to books that I'd started. I'd trashed a 17,000 word book because the heroine wasn't interesting enough. I'd already started and stopped three ideas before that. How frustrating to have spent all that time writing and have nothing solid to show for it. There's this pressure to keep books coming. But there's also the pressure to produce quality. She said that when a book idea comes to you, leave it for a while. Stew on it. If the idea won't let you go, then it's the one. Wedding Gown Girl's idea was one of those that wouldn't let go. So was Dragonfly Moment's. I think she gave a very valid point.

I'd started another book just before the 17,000 word one but put it aside to concentrate on The Creators Series. You see, Dragonfly Moments is book one of the The Creators. The creators are characters who create. Tessa is an artist. So, each of my books will have a hero or heroine or both who create things. Anyway, I wanted to work on Tim's story. But the heroine in his story didn't work. She was too wimpy. I'd started another book set in Zambia where I lived for seven years. I kept on wanting to go back to that book but knew I needed to work on the book two. I did go back because the characters were calling. Then I had an absolutely wonderful revelation. My heroine is a creator. She's a ballet teacher and choreographs dances. This book can be my number two.

It doesn't stop there though. This book is taking some time to write. One reason, is busyness in my life at the moment. I don't have huge chunks of writing time anymore. I have to make time. Also, I'm taking it slow. I'm researching, working on setting and pondering everything. I think the more I learn about the craft, the longer I take to write a book.

There are times that call for fast and furious. Nanowrimo is one of those times. And it does produce results. My Nano novel from last year is coming out with Astraea Press in early July. It's going through a fast and furious edit to get it out in time. Kind of like cooking a soup or stew as opposed to fried steak. Hope that the quality doesn't suffer with speed.

Image courtesy of www.morguefile.com
Posted by Kathy Bosman at Wednesday, May 29, 2013