The Other Side by Zee Monodee 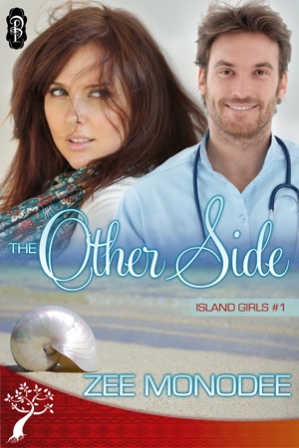 Today, I have Zee Monodee, versatile and prolific writer, wonderful editor, and fellow African writer friend. She lives in the beautiful island of Mauritius which is north east of the eastern South African coastline. A place I would adore to spend a summer holiday at one day. She's also the managing editor of the Ubuntu line series which are African stories published by Decadent Publishing - the series "Dragonfly Moments" was published under.

Her new release "The Other Side" is the Ubuntu Line's third release.

Here's a bit about Zee before we go into some juicy details about her new book:

Zee is an author who grew up on a fence – on one side there was modernity and the global world, on the other there was culture and traditions. Putting up with the culture for half of her life, one day she decided she'd stand tall on her wall and dip toes every now and then into both sides of her non-conventional upbringing.

From this resolution spanned a world of adaptation and learning to live on said wall. The realization also came that many other young women of the world were on their own fence.

This particular position became her favorite when she decided to pursue her lifelong dream of writing – her heroines all sit 'on a fence', whether cultural or societal, in today's world or in times past, and face dilemmas about life and love.

Hailing from the multicultural island of Mauritius, Zee is a degree holder in Communications Science. She is a head-over-heels wife, in-over-her-head mum to a tween son, best-buddy-stepmum to a teenage lad, an incompetent domestic goddess, eternal dreamer, and an absolute, shameless bookholic. When she isn’t penning more stories and/or managing the Ubuntu line at Decadent Publishing, you can bet you’ll find her with her nose in her tablet, ‘drinking in’ a good book.

Here is a blurb of The Other Side. It is Book 1 of The Island Girls Trilogy.

Divorce paints a scarlet letter on her back when she returns to the culture-driven society of Mauritius. This same spotlight shines as a beacon of hope for the man who never stopped loving her. Can the second time around be the right one for these former teenage sweethearts?

Indian-origin Lara Reddy left London after her husband dumps her for a more accommodating uterus—at least, that’s what his desertion feels like. Bumping into him and his pregnant new missus doesn’t help matters any, and she thus jumps on a prestigious job offer. The kicker? The job is in Mauritius, the homeland of her parents, and a society she ran away from over a decade earlier.

But once there, Lara has no escape. Not from the gossip, the contempt, the harassing matchmaking...and certainly not from the man she hoped never to meet again. The boy she’d loved and lost—white Mauritian native, Eric Marivaux.

Back when they were teens, Eric left her, and Lara vowed she’d never let herself be hurt again. Today, they are both adults, and facing the same crossroads they’d stood at so many years earlier.

Lara now stands on the other side of Mauritian society. Will this be the impetus she needs to take a chance on Eric and love again?

Some interesting facts about the book:
Here is an excerpt:

Lost in her thoughts, she rounded a dead corner of the hall, slamming into someone’s side. Disoriented and dizzy with confusion at the jolting oomph of impact against a solid form, she stumbled, losing control over her legs. She saw the walls moving up rapidly, but a strong pair of hands grabbed her under the arms before the back of her head hit the floor.

“Bon sang, mademoiselle! Où courez-vous comme ça?” a rich, deep masculine voice asked on the sharp yet lilting accent of white Mauritian natives.
Where are you running to, miss? he’d asked, from what her rusty French could figure out.
Away from you. Something inside her acknowledged the danger before she could process his words. She knew that voice. Her head spun again, yet her mind was very alert.
Could it be…? No, it couldn’t. Her brain had to be playing tricks on her. The sound with its particular accent belonged to the very distant past. How was she hearing it at this moment? Had she fainted? That’s it. She wasn’t conscious, and since she’d probably worked herself to exhaustion, the condition had triggered all sorts of switches in her muddled consciousness.
The image of the man from the airport burned itself into her mind, and she gasped. No!
“Is everything okay?” The chuckle had gone from the tone, replaced by worry.
Solid strength still held her ribcage, the back of the hands warm and smooth where they touched her arms. The heat from them went to her head, churning all coherent thought into a jumble.
Her mind had to be playing a trick on her. He couldn’t be who she was imagining. When, after a few seconds, it didn’t appear like she’d come around, doubt invaded her heart.
Your eyes won’t betray you, they’ll see the truth.
She risked a glance up beneath her lashes. She had to be certain if this was real or not. To know this was all a trick of her imagination….
Lara encountered a tall form with broad shoulders outlined in a short-sleeved shirt. The lapels of the opened collar framed a strong jaw and a wide, full, and sensual mouth was set in a worried line above a square chin. A fine, straight nose sent faint shadows over his lips.
She had to gulp back the ominous lump wedged in her throat. Her heart beat a hammering throb in her chest, and her mouth went dry. Her suspicions looked dangerously close to being confirmed, and the nagging notion played havoc with her thoughts. She closed her eyes.
When she opened them, she found herself staring into a pair of blue irises. A blinding flash went through her head, plunging her heart to her knees. She’d recognize those irises anywhere. Deep-set, bright, and laughing eyes the colour of the deepest ocean. The heavy, golden locks brushing his forehead accentuated the frown knitting his eyebrows.
Locks that had somehow broken free from the thick, smoothed-back hair. She itched to sweep them back, to run the tips of her fingers along his smooth skin, like she used to in the past, onto the soft buzz of hair he used to keep so short….
Her mind went into a crazy spin, and all her senses reeled as everything became a vivid kaleidoscope of colours. Her stomach heaved, and her knees went weak as her body became limp. But the man’s strong grip was still on her, and he kept her steady on her feet.
“Are you okay? I think you better sit down here,” he said.
The voice made its way into her perception, and she couldn’t suppress the relief that flooded her. His voice had always had such power over her.
He still hasn’t recognised me.
She’d changed a lot in the past decade, and with her head still bent forward, her hair shielded her face. She wanted to escape. She wanted to close her eyes, and then open them to find it had all been a dream. Or a nightmare.
But this was real, and how long could she remain incognito? Lara swallowed painfully. Of all the people from her past, fate had had to choose that precise person to shove along her path.
All of this battled inside her mind as she allowed him to lead her to a sofa. After having lowered her into her seat with extreme care and gentleness, her saviour sat down next to her, turning to face her profile. The movement triggered the air to move around him, and the smell of his aftershave—fresh, spicy, and very elusive—filled her nostrils and made its way into her foggy mind.
He still smells the same. Like a cool sea breeze wafting through the unique musk of a man’s warm skin.
Lara took a deep breath and gathered her courage. She would have to face him sooner or later. A part of her had always known she ran the risk of coming across him on the island. She’d preferred to hide from the probability, but she couldn’t run anymore.
So she lifted her head. A frown marred the wide forehead on the face she encountered. As devastatingly handsome as ever. Or maybe, even more than ever. His features were arresting, masculine, adult. No longer those of a teenager.
Her mouth went dry again, and her heart beat faster when the straight line of his lips broke into a large smile a few seconds later. His eyes lit up as well, and widened.
“I’ll be damned! Lara? Is it really you?” he asked, switching effortlessly to English.
She forced a smile and took a deep breath. “Hello, Eric. How are you?”
Buy links for The Other Side:
Decadent Publishing
Amazon
Posted by Kathy Bosman at Friday, August 02, 2013