Ariella Moon (What a Gorgeous Name) Author and Book Spotlight

Today, I am spotlighting YA author Ariella Moon. She's a fellow Astraea Press author who has written a series of books for the Teen Wytche Saga. Her book, Spell Struck, which we will be talking about today, is book 2 of the series. The covers are soooo beautiful! 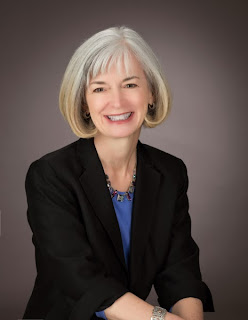 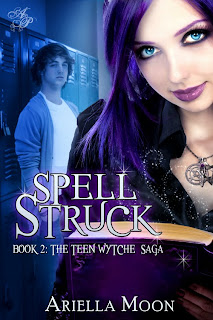 What if the one person who saw through your lies and loved you, harbored a secret that could cost you everything?

Back Cover Blurb
Goth outcast, Salem Miller, believes her love spell failed until Aidan Cooper arrives at Jefferson High. When he chooses her over the popular girls, Salem knows magic brought him. But can she summon enough wizardry to save her sister? Salem fears Amy’s next suicide attempt will succeed. Magic brought Aidan. Maybe it can cure Amy. Salem’s last hope lies hidden within a damaged grimoire, nearly destroyed by a wrongful love spell. Was her rightful love spell enough to restore it?

Newest Jefferson High transplant, Aidan Cooper, doesn't expect to be attracted to a goth. Then he realizes Salem is throwing a glamour—pretending to be something she’s not. Guess it takes one to know one, since his whole life has been a lie. But if his kidnappers discover he's broken their No Attachments rule, he'll never see Salem again. Worse, he’s terrified they’ll harm her when they discover she possesses the ancient grimoire. To protect Salem, Aidan must destroy the grimoire, and escape his captors.

While Salem races to unlock the Get Well Spell, Aidan scrambles to overcome his past. With their star-crossed paths at odds, will time run out for both of them?

Excerpt
Aidan lowered his hand. His finger pressed against my skin, shooting a delicious tingle up my arm. When I didn’t move away, he hooked his finger over mine. My breath caught. We stayed, frozen, hyper-focused, for what seemed like three lifetimes. Then Aidan trailed his fingertips across the back of my hand. The soundtrack, popcorn smells, and theater audience melted into the background. The world narrowed down to the unspoken grief and need entangled in Aidan’s touch.

I rotated my hand so my palm faced upward. Aidan hesitated. Our gazes locked in the flickering light. The spell link humming between us lit up like blue lightning. At least I think it was the spell link. Aidan plunged his fingers between mine. Our palms pressed together, igniting a current. Air shuddered from my lungs. Magic rippled from us in successive waves.

My heart stuttered. My breath ceased. Every cell within me vibrated. Troops of fairies or dragonflies took flight in my lower abdomen. It’s possible blue lightning shot from my boots.

You can buy Spell Struck here:

You can connect with her at: