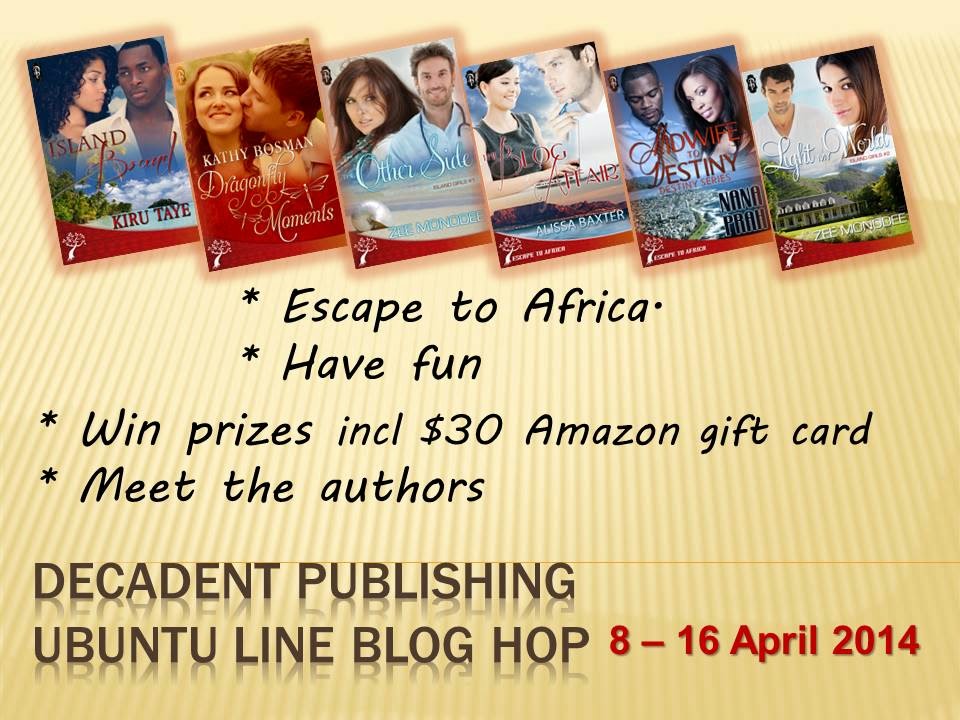 Ubuntu is an ancient African word meaning "I am what I am because of what we all are." It speaks of unity and working together. So, as authors of the Ubuntu Line with Decadent Publishing, we are working together to bring awesome books set in Africa.

This April, we have organised a blog hop with wonderful prizes and an opportunity for you to discover more about Africa. The theme of this blog hop is "Pop Culture in Africa." The modern Africa is very different to what has been portrayed in classical literature. It's a continent full of colour, life and fascinating culture. Won't you Escape to Africa for the next week and a half and discover things you didn't know about the lovely continent.

Today, I'm going to talk about art in South Africa where my book is set and specifically street art. In my Ubuntu Line book, Tessa is an artist struggling to get her new gallery going. Ryan takes her to see some pavement art in the centre of Johannesburg. The moment they share while looking at the 3D realistic artwork painted on the pavement, touches Tessa's soul. She feels an intense bonding with Ryan but her need for stability holds her back. To her, Ryan is a free spirit and not someone to depend on, or so she thinks. She wants Mark who is good father material for the family she's dreamed of for years.

South Africa has some fascinating street art but is fairly new in terms of being graced with pavement art. Kurt Wenner, the pioneer of pavement art in the world, drew three 3D artworks in chalk for Hyundai in April 2013 - one in Durban, one in Cape Town and one in Johannesburg. Kurt Wenner was a scientific illustrator for NASA who gave up his lucrative position to live in Italy and study the old Roman masters. He has spent most of his life teaching others art and produces magnificent works himself. He's even published a book called "Asphalt Renaissance" talking about the revival of street art through 3D pavement art. Street art has a power that other art lacks in that it touches everyone - the man on the street, the everyday person. It's not confined to galleries where often only the cultured, financially stable or educated visit. Street art is often done by the ordinary person too. I love this African street art at Khayelitsha township.

Street art is a big part of our culture - from designated (controlled) graffitti to African art on buildings and structures and several sculptures adorning shopping malls around South Africa. I think pavement art takes it to a whole new level. There's nothing like walking down the road and seeing a picture that takes you into its world with a quality of depth perception and reality that's beyond the norm. If you're interested, take a look at one of Kurt Wenner's works done in April last year in South Africa: V&A Waterfront Pavement Art

Here's a little excerpt from the scene in my book when Ryan takes Tessa to see the art:

He drove in silence, the muscles in his arms like orchestra music, so in sync with every movement. She turned away and watched some wide-eyed school children carrying their heavy bags from school, playing recklessly with one another by the road. Longing tugged at her heart a moment, and she swallowed a lump in her throat.

“Here it is,” he said with a dramatic whisper. He parked the car and opened the door for her, escorting her to walk with him down the road. What could be so interesting and artistic about this place? Maybe there was a secluded artist living in one of the flats with a hidden talent—a modern-day Picasso.

They crossed a busy street over to the center of a traffic circle, like the eye in the midst of a storm. Then her eyes opened as if for the first time. Her legs remained rooted to the spot. People walked past them as if they were on any street or sitting on an ordinary park bench.

Traffic roared around them. Taxi drivers shouted for their passengers through their windows, hooting at the other cars. But those sounds didn’t take away from the experience. She stepped on the artwork painted directly onto the paved middle of the traffic circle, her body wanting to take the spiral staircase that majestically wound itself down to a dungeon scattered with treasures, artifacts, and ancient statues. The astounding detail and use of perspective created a depth that was beyond reality.

“I can’t remember his name, but we can get the tourist brochure at the info booth if you want to find out. He has several more scattered about town. I know where they all are."

The moments when they stood, poised, Ryan’s arm brushing hers, the whole world seemed to fade. She imagined herself with him in the ancient dungeon, walking through wooden treasure chests overflowing with twinkling jewels and chunky gold chains and coins. She bent down at the base of the stairway and touched a large ceramic pot with primitive artwork painted on its middle. A snake peered out from the eye socket of a skull sending a shiver down her spine. The dusty pavement and the noisy people didn’t distract her. After some time, she glanced at him and the gentle smile he gave her, with a breeze whipping his hair, completed the whole picture. They didn’t need to talk. The time was for reflection and savoring, a moment in her life to remember forever.

Here are the prizes you can win by entering the Rafflecopter giveaway below - just click on the link.

To enter the competition, click the rafflecopter link below.

For tomorrow's hop, go to to Zee Monodee's blog.