I'm happy to have Heather Gray with me today talking about her new release, Jackal. It's book 2 of her Regency Refuge inspirational historical romances. I love Regencies but could never write them. I take my hat off to Heather for writing in this fascinating genre. She's conquered other genres too. The cover is beautiful! 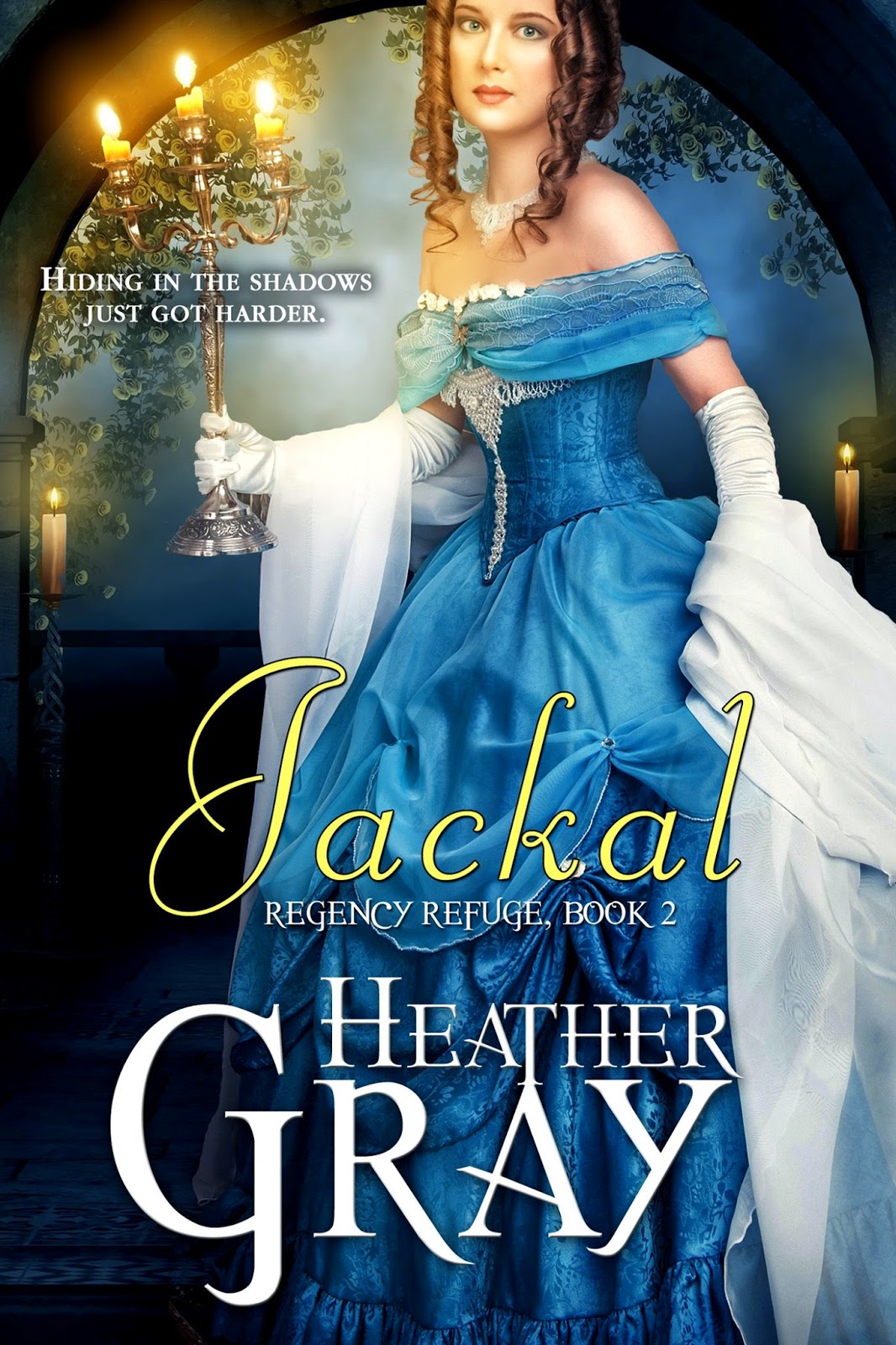 Back Cover Blurb:
Hiding in the shadows just got harder.

When tragedy strikes, Juliana and her family must flee their home. Can they persuade a virtual stranger to help them? Juliana isn't so sure, especially after their chaperone threatens to cane him. Even as Juliana struggles to trust him, she finds herself drawn to this mysterious man. Surely all she wants from him is refuge…

Rupert is a man whose life depends on his ability to remain unnoticed. What, then, is he supposed to do with this family he's inherited?  His life is overrun with an ancient chaperone who would terrify a lesser man, two spirited girls, and the secretive Juliana – someone he comes to think of as his own precious jewel.

With this new responsibility thrust upon him, Rupert will have to make sacrifices – but will God ask him to sacrifice everything?

Excerpt:
1810
A duke had been cut down in the prime of his life. According to the War Department, The Hunter was to blame.
Jackal had been put onto The Hunter's scent and told to ferret him out at all cost. It was his job, his duty to the crown, and he treated it with the seriousness it demanded. Evil could not be allowed to go unpunished, and people who took pleasure in destroying the lives of others would not walk away with impunity, not on his watch.
Jackal met with his contacts in the Austrian government and found no gratification in revealing they had a traitor in their midst. It had been a necessary move, and now the problem would be dealt with. The Austrians would put The Hunter down, and England's hands would remain clean of the mess, exactly as the minister wanted.
Grim foreboding furrowed his brow as he left the meeting with the Austrians. His lack of evidence mocked him. He'd done as ordered, and they'd believed him, but had it been his choice, he'd have gathered more proof first.
Jackal climbed into his carriage and slapped his hand against the roof, signaling the driver with his readiness to depart. A lengthy ride awaited him. He would leave the carriage and his current identity behind in Munich once he arrived there. New papers and fresh horses were waiting for him. The same would happen again when he crossed over into Stuttgart, and then again in Brussels. His task was clear: remain alive long enough to claim each of the new identities and return safely to his homeland.
Sitting back on the roughly cushioned seat, he accepted what he'd begun to suspect. This would be his last assignment for the crown. He was getting too old for the job. The time to retire was upon him. The younger bucks were willing – if not entirely ready – to take their place among the ranks of the unseen, unknown, and unnamed heroes of war. Jackal shook his head. Not too long ago, he'd been one of those young bucks. Ready for retirement at age thirty-two? The thought would be laughable in any other career. In his line of work, though, only those who retired young lived to be old and grey.
Lost in melancholy, Jackal barely noted the change from the raucous noise of a bustling merchant district to the quiet pastoral sounds that would accompany him on most of this journey. Europe was a large land with rich cities interspersed with vast emptiness dotted with small hamlets. Traveling by carriage would take weeks, but as long as he could report back that he'd done as ordered, it would be worth the time.
He settled into his seat. They were still days from their first sanctioned stop. As always, the best defense was to keep moving.

A change in the carriage's soothing methodical movement woke Jackal from his doze and alerted him that something was amiss. Awareness coursed through his veins, pushing away the remnant of sleep. A quick glance at the curtained window told him it was late morning. They'd ridden through the night to put as much distance as possible between them and Vienna – the current hub of Austrian government.
The carriage was moving with a wildness he'd felt only one other time in his life. Dread snaked through his middle as he accepted the truth. There was no longer a driver in control of his conveyance. Jackal crouched low on the floor for balance as he prepared to throw open the door and jump. Perhaps he should have sought retirement one assignment sooner.
Before his hand could touch the door, a jarring force threw Jackal against the seat to his left, shooting pain up his arm. They'd been boarded, then, and his driver – an agent he'd worked with for years – had likely not been alive to sound the alarm. Emotion would come later. For now, Jackal needed to focus on one thing: Survival.
The carriage gained speed under the skillful hand of whoever now sat in the driver's seat. I should have jumped when I had the chance. Jackal shook his head as he calculated the odds of survival.
Palming his gun, he pounded on the roof of the carriage, commanding the driver to stop. Surprise flared to life as his conveyance did indeed come to a standstill. Rather than slow to a gentle stop, the carriage halted its forward momentum in a skidding bone-shaking fashion. It was the kind of stop that guaranteed no beast would be able to walk away from it afterward.
Jackal jumped before the dust could settle. His best chance would be to go on the offence and catch the driver off-guard. Though he'd assumed the driver had a partner, nothing could have prepared him for the vicious attack awaiting him on the other side of the door.
Jackal no sooner touched the ground than he was trampled under the anxious feet of a high-stepping horse. He'd not even had a chance to gain his footing. As he lay on the ground, Jackal both heard and felt the breaking of bone in his left leg. A couple of his ribs surrendered to the heavy hooves as well. Rolling onto his side, he took aim at the perpetrator. The sun blinded him, and he could distinguish no features on the man whose gun dared him to move. In the split second it took for him to reassure himself he was not aiming at an innocent bystander – for they were indeed in one of the numerous modest hamlets that dotted the continent's countryside – the rider pulled the trigger, and pain seared through Jackal's already throbbing leg. It felt as if the lead had burrowed its way into his very bone.
He pulled the trigger of his flintlock pistol, and the man on the horse recoiled. Even as Jackal reached for the gun concealed at the ankle of his wounded leg, he knew it was futile. The rider had a second gun in-hand before his own fingers even brushed against the grip of his hidden weapon. Pain tore through his shoulder, immobilizing his shooting arm. Another ball of lead ripped into his middle. He felt his blood seeping out onto the street.
Accepting his fate, he asked only one thing. "At whose hand am I to die this day?"
Laughter vile enough to sour port met his question. "Today the Jackal shall meet his end at the hands of The Hunter."
The Hunter? The Austrians were supposed to have him by now.
"Your plan failed, and I am free. Prepare to die."
Blackness closing in around him, Jackal released the last thought held captive in his mind.
Why God?
Cold claimed his body as he slipped into darkness. He neither heard nor felt the next shot.

Author Bio:
Heather Gray is the author of the Ladies of Larkspur inspirational western romance series, including Mail Order man, Just Dessert, and Redemption.  She also writes the Regency Refuge series with titles His Saving Grace, Jackal, and the soon-to-be-released Queen.  But that's not all!  Interested in contemporary Christian romance?  Take a look at Ten Million Reasons and Nowhere for Christmas.

Heather loves coffee, God, her family, and laughter – not necessarily in that order!  She writes approachable and flawed characters who, through the highs and lows of life, find a way to love God, embrace each day, and laugh out loud right along with her.  And, yeah, her books almost always have someone who's a coffee addict.  Some things just can't be helped.