The last of the series is now out - Winds of Change of the Island Girl's Trilogy. I just finished reading the book today so find my review below. Don't you just adore this cover? 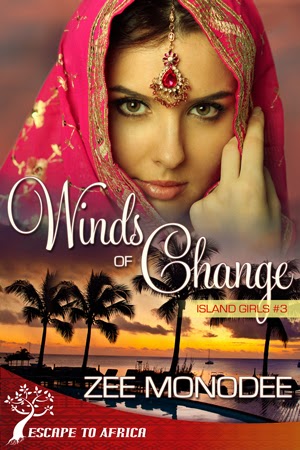 
To be with him feels like playing Russian roulette blindfolded all while knowing she bet from borrowed lease. Can something this wrong be....right?

Neha Hemant has always been called the neutral one – like sensible Switzerland. She’s never rocked the boat, and has always done everything expected from her, an Indo-Mauritian woman.

So where’s the fulfillment, the sense of completion...

And worse, why does she find this feeling of coming home with a man totally not right for her? She’s a widow with three teenage children, and Logan Warrington is a reformed bad boy, and her boss.... He shouldn’t have the power to make her burn, make her yearn, and wish for nothing more than damning the consequences, not when she has lived her whole life trying to do the right thing society expected of her.

As the winds of change blow on Neha’s life, could the time have come for her to step out of her bubble, and live for the moment, and herself?

You can catch all of the first two chapters of the book here, and if you want to delve into the whole deal, then here are the links where you can find WINDS OF CHANGE (Island Girls #3)

Zee is a master story teller. She's woven a tale of complex, real characters who go through the storms of change in this heart-wrenching and touching novel. Neha doesn't like change. She likes her world in a perfect flux but when her husband disappears in a flood and they can't find his body, she and her kids presume him dead. She's coped so long with a distant and uncaring husband anyway, so her life changes little until she obtains a new job at a TV broadcasting company and she meets Logan. Logan brings a storm into her passive, resigned existence and stirs up Neha's true heart. Logan is a fascinating character. He's a New Zealander - reminds me of one of the All-Black bulky rugby players - although he's an ex-boxer. He's got his own baggage and at first he seems harsh and unreachable. Neha's attracted to him but also intimidated by him. He reminds me a bit of a bull in a China shop with a very soft heart hidden inside. Neha is the opposite - she's soft, pliable, peace-loving and one of those woman who does the right thing even if it hurts. I love the way they work out to be perfect for one another but it takes Neha a long time to come round. At times, I was annoyed with Logan, especially around the middle of the book. I wished he would just make a move and follow his heart, but I know deep inside that if he had, he would have scared her off. She reminds me of a doe in the bush - you dare not make a sudden, harsh movement, because then she'll make a dash for it. As much as Logan can be brash and bulldoggish at work, he's really gentle with Neha and he takes his time with her. This story has many facets and will keep you going for some time - it's like a real family saga. It was lovely to learn about the last sister in the trilogy and discover her story and her heart.

To be honest, Neha and Logan remind me eerily like my husband and I before we married - very similar personalities and conflicts that we went through so I could identify with a lot of the book. Logan is a lot like my husband who eventually couldn't take my nonsense anymore but it was a good thing, lol. I loved the way Logan broke through her shell of "right" and warmed her heart to his passion. The love scenes were touching and beautiful and real. A romance with a very realistic feel to it.


If you haven't already, you can find Zee here: