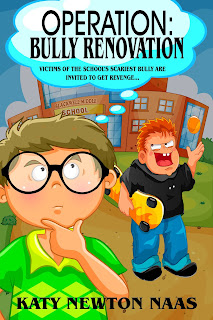 
Jack Sullivan is Blackwell Middle School’s scariest bully. When students and teachers see him coming down the hallway, they run the other way. He has no friends; he doesn’t need them. School is a waste of his time.

But after a car accident with his father leaves him in need of surgery, Jack has to have a tissue donor. Strangely, he then begins having memories from events that never actually happened to him – memories of being bullied by bigger, meaner boys. Jack learns he is experiencing cellular memory, which makes him receive the memories of his tissue donor…who just so happened to be a weak, helpless victim of bullying.

Jack decides he has to make things right. To do that, he offers each of his former victims an apology, along with the chance to choose a way to get even with him. But Jack quickly learns that earning their forgiveness won’t be easy...

Jack shoved the head of the writhing boy further into the toilet, feeling a small glimmer of satisfaction as he listened to the muffled screams. He watched the water bubbles come up from the nameless boy’s mouth as he tried to make noise and fought a useless battle, trying to escape the grip of Jack’s large fingers on his neck. Jack continued to hold the boy’s head under the water, waiting patiently for the boy to stop moving. When he did, Jack quickly pulled his head back out of the water, watching the helpless boy gasp for breath and slap the water off his face while tears filled his eyes.
“If you tell anyone what just happened, I’ll kill you,” Jack growled at the boy, giving him his most convincing glare before he casually walked away, leaving the boy crumpled on the floor, drowning in his own sobs.

Jack walked out of the locker room and rejoined the rest of the members of his gym class just as the dismissal bell rang, signaling the end of his school day. He shoved past several students who were heading for the gym doors, ignoring their grunts and protests as he bumped into them from behind. He knew that as soon as the other students saw who was pushing past them they would quickly shut their mouths in fear. No one wanted to make Jack Sullivan mad. No one even wanted to be on his radar. He was crazy. Unpredictable. No one messed with him; no one even looked at him. The scrawny new boy in gym class had just learned that the hard way. A nice swirly would teach him to ask Jack to pass him the ball.

Jack smiled to himself as he walked down the middle of the hallway, thinking about his own reputation. Every boy and every girl that roamed the halls of Blackwell Middle School was terrified of him. It was obvious at all times, even as he made his way out of the building. The other kids intentionally averted their gazes and deliberately moved to the other side of the hallway to avoid any accidental contact. Even the teachers pretended to be engrossed in something else whenever he came into view. He smirked slightly as Mr. Andrews stared at the file in his hand while he passed, never smiling up at him or even glancing in his direction with so much as a nod, though he’d greeted the group of students a few feet in front of him only moments ago. There was no doubt that he brought terror to the hearts of others, both kids and adults.

That was just the way Jack preferred it. He didn’t need friends; he had no interest in any of the idiots that surrounded him in his classes. He hated school, hated the teachers, hated the classes, and hated the structure of it all. He hated the clubs and the sports and even the stupid cardinal mascot that covered the walls of the building. If everyone were scared of him, no one would try to talk to him. He felt invincible as he pushed through the double doors of the front of the building.
Trudging down the sidewalk toward his home, he never looked back at the building he had come to loathe so much. He couldn’t wait for the day when he’d never have to step foot in that hole of a school again. As an eighth grader, he didn’t have too much longer to wait.

He often considered quitting. He would call it an early retirement, he decided. But then he would remember the state’s dumb law that a person has to be sixteen to quit and be left alone. If he stopped showing up now, the feds would get involved and make his life complicated. Not that he was scared of a bunch of low-life feds; he wasn’t. But he knew they wouldn’t be as easy to avoid as his teachers and the students at school. If he could just hold out for a couple more years, he could quit and no one would bother him about any laws. So for now, he showed up most days, keeping the number of days he skipped strategically low so that they would go unnoticed.

As he approached two girls standing together near the end of the block, giggling incessantly, Jack wrinkled up his nose in disgust. He glared in their general direction, laughing on the inside when their annoying high-pitched laughs ceased at once. It was more than fear that the kids felt toward him, he decided. It was respect. And to Jack, respect was the most important thing in the world.

From the time she was old enough to talk, Katy Newton Naas has been creating characters and telling stories. As a child, they sometimes got her into trouble. She knew she wanted to write books when she won a Young Author's competition as a second-grader for her short story titled, “The Grape Pie.” (Don't let its tasty title fool you - it was actually a sad little tale!)

Katy devoured books as a child and young adult, always doing chores and odd jobs in order to make enough money to buy more of them. Though she continues to age, her true literature love is and has always been children's and young adult fiction.

Katy currently teaches middle school reading and high school English in southern Illinois, as well as children's church. She graduated from Southern Illinois University-Carbondale with a bachelor's degree in English Education and a master's degree in Reading and Language Studies. She enjoys her life out in the country with her husband, her two sweet and rowdy young sons, and all her other “kids”: four dogs, three cats, and eight ducks.

She loves creating both realistic and futuristic stories about kids, tweens, and teens, and feels so fortunate to get to work with them every day as a teacher.