It's the day - Looking for Love has released. I can't believe I pressed "publish" and took the plunge to publish my first official indie novel.

A hundred thanks to my editor, Zee Monodee. I couldn't have done this without her! 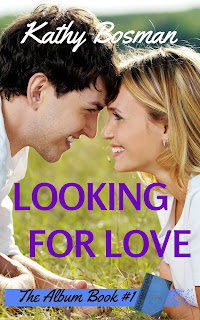 
When Ella Haviland inherits a magic antique photo album that reveals the future of potential couples, she starts a part-time matchmaking business with the help of her three best friends. It's always been her dream to help people find love. But finding true love herself isn't in her plans — even when her best guy friend Ross confesses he's fallen for her. Friendship and love equals recipe for disaster in her mind.

Ross Mitchell is devastated that Ella doesn't want more from their relationship. He withdraws ... but maybe he should play along when Ella tries to matchmake him with a friend, just to make her jealous. He will do anything to make her notice him.

Through a series of adventures and happenings, Ella discovers that maybe The Album brings more than love and magic into the lives of the people it touches. But can she find true love herself, or is there too much holding her back?

“We’re so similar, it’s scary.”
He stroked her cheek. “It’s nice.”
“You’re nice.”
Close up, he really had the best face in the world—a face that brought her the most comfort.
He bent toward her until his lips touched hers, only a brush. She jerked back. “No, Ross.”
What just happened? Did I give him the impression I…?
“Ella, I…” He moved forward again as though she hadn’t just said no.
“Ross, please.” She stopped him on the chest with her palm, closing her eyes to block out the sight of his mouth close to her. “Leave the kissing out of it. We’re friends. We’ve never had anything romantic.”
“I can’t see why not.”
“Do you have feelings for me?” She opened her eyes as the ache in her chest expanded again. She didn’t know how she would handle it if he did.
“I don’t know. I care about you. You just looked kissable. I wasn’t thinking. I’m sorry.”
“Okay, you scared me there. The last thing I want is another boyfriend. I’ve had my fill of relationships for a century.” She rolled her eyes. Although her tone came out light-hearted, the fear he’d want more had paralysed her for a second. She could have lost everything—except her besties and new job—in one week.
Ross nodded. “I can relate to that.”
“I seem to keep on attracting the wrong guys, or rather ones who don’t understand me.”
He patted her on the knee, once again his normal, kind self. “One day, you’ll find someone.”
“Yeah, one day. But not today. For now, I’m concentrating on building a life for myself. We’re still friends, right?” She’d hate to lose her precious friendship because of an attempted kiss.
“Of course. We’ll always be friends. My partner in crime.” He knocked his knuckles against her fist in a fun gesture. Phew, he didn’t seem at all offended at her pushing him away romantically. Truly a saint, he was.


Giveaways and a sale to follow shortly! I have a lot of admin to do - self-publishing is HARD work!!