Latest Release - The Magic of Love

I'm feeling really pumped about my book. It's just come out. 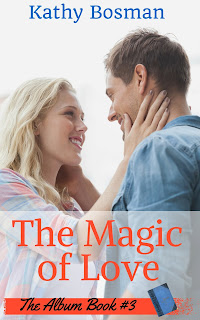 Usually, I hate the galley's process (when you read through it one more time before publication) but this time I enjoyed reading through my book. My editor did an amazing job!

Anyway, I hope you enjoy it as much as I did.

And WONDERFUL NEWS!...... My Album 1 is now on perma-free. I'm in the process of updating the prices in all the online shops, but it is free on Smashwords. So, head on over and get yourself a copy. And read it! And write a review!

Get it here: Smashwords

This has truly been the best series to write. I've thoroughly enjoyed it!


The Magic of Love
Book 3 - The Album Series

In Canada, they soon discover that not only has Cliff stolen The Album, but also magic antiques belonging to other people from South Africa. They soon recover the artefact but, much to Carol’s disappointment, the magic is broken. Carol needs answers and is also burning to help the other antique owners - even if it means leaving her successful career and working with Darryn who has his own issues from his past.

How can Carol still have feelings for a man who keeps on breaking her heart? And will she fix the magic? Once again, The Album's magic works in mysterious ways.

You can buy here:

Her heart seemed to have taken up interval sprints as a new sport since Cliff’s betrayal, and it chose that particular moment to do its workout. She shuddered and took in a deep breath to calm herself.
The man’s eyes softened and her tension eased a notch as she suspected he had compassion and wasn’t just a jaded investigator used to working with desperate and sometimes crazy individuals. Come to think of it, he seemed too cute to be behind a desk in an office block in town, surrounded by dusty files and one or two other reserved employees. Should have been gracing the pages of a magazine or at least in a corporate environment to stir up all the young women. Not that she’d ever gone for the pretty boy type. Or rather the ‘look at me, I’m God’s gift to women’ guys.
“Miss Barronse, are you okay? Did your boyfriend cheat on you?”
She shook her head. “Not in the sense that you probably think. He stole something valuable of mine and disappeared.”
“You say you haven’t seen him since yesterday?” She nodded, her heart flipping again. “I know it sounds crazy, but I’m convinced he stole it. He’s the only one who knew I had it besides my friends…”
He narrowed his eyes at her. To a stranger, her reasoning certainly didn’t make any sense. Sucking in a breath, she braced herself to tell him the truth about The Album. He had to know why she needed it back in her possession. What if he couldn’t be trusted, either?
“I’d like to sign a confidentially agreement with you first before I tell you exactly what Cliff Nel took.”
“We don’t normally do that. Our policy it to keep your privacy intact.”
“How can I trust you won’t steal the item, too?”
Anger flickered across his gaze, giving him a dark and broody look.
The guy sure was handsome. Working with him would be enjoyable, not that she could even consider a relationship at this stage in her life. If ever. Too bad the current day and age dictated it wasn’t as fashionable being a spinster anymore. She envisioned adopting at least five cats and sourcing a couple of exotic monitor lizards and spending the rest of her life alone in her house, doing whatever she liked and being crazy about neatness and punctuality, just the way she wanted to be without anyone interfering in her lifestyle. No guy telling her to loosen up or make space for his clutter, or saying she needed to spend money on frivolous things. Wanting to cut into her savings and spend all her money—
“It will be nine hundred rand per hour.”
“What?” She coughed and swallowed a big lump in her throat. “It won’t take you long to find him, will it?”
So much for all her savings, having money freedom, and no worries for the future.
“It all depends. I can’t say. It could take from two days up to several weeks.”
“What?” She did a quick calculation. Not pretty.
His lips curled up in a sardonic smile. She wanted to punch the glee from his face and make those straight teeth skew. Fisting her hands, she bit her lip instead and took several calming breaths.
“So, on top of losing my most valuable possession and a long-term relationship, you expect me to blow away my savings from the last few years, as well?”
“It’s the going rate.” He didn’t seem perturbed by her rude outburst.
“What about the man in the street, Mr. um… Mr….” She searched her memories and the wall behind him for some clue to his name.
In all the panic, she’d forgotten his name. She’d always prided herself on a faultless memory, in fact photogenic, as many people called it. What was wrong with her?
“Mr. Darryn Reeve.”
“Mr. Reeve, don’t you care about the everyday person?”
He laughed. “My sentiments exactly.”
“What?”
“You seem to say that a lot, Miss Barronse. I’m the everyday person and I need to make a living, pay rent, pay staff, keep the office running. But why am I appealing to an accountant? You should know those things.”
How did he know she was an accountant? She hadn’t given him any information about herself. He had been tapping away on his keyboard while talking with her. Had he already checked up on her? It should make her angry that he’d chosen to do that, but instead, it impressed her socks off. How subtle and how professional. It could mean he’d find Cliff fast.
Posted by Kathy Bosman at Thursday, May 05, 2016