Today, I want to welcome fellow ROSA writer, Marie Dry, to my blog, with her 5th book in her alien romance series. 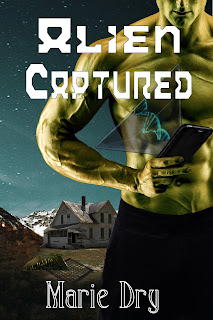 In a bleak future, where government systems are breaking down and poverty and violence reign, on an abandoned farm in Montana, Susannah had a simple plan. She’d capture an alien, sell him to the resistance, and use the money to save her son.

Instead, Susannah had an arrogant alien trapped in a pit who acted as if she was the prisoner. He wanted to kill her dog and insisted she should care for the wound he sustained when he fell into the pit she dug to trap him. On top of that, she had no way to know if the resistance got her message. Every day that passed, she doubted her decision to hand Azagor over to the resistance.

But her son, her baby, was being held by people who considered him unclean because he was conceived out of wedlock—and time was running out.

She thought she had everything under control until her little dog fell into the pit that held the alien captive.

Susannah jumped up, and Killer, who had sat next to her, yipped and jumped away. Everything slowed around her, and while she stood, horror freezing her veins, Killer fell into the hole. His small paws scrabbled at the rusted iron of the trapdoor and then he fell. She saw his mouth move, knew he was barking and yipping, but she couldn’t hear him.

Susanna stood petrified, her heartbeat slowing, seeing the world around her > through a tunnel. The only other time she’d felt this strange sensation was when she realized they’d taken Noah, and she’d never see him again. At the end of the strange twisting tunnel, she saw the alien’s green savage face staring up at her.

He held her tiny dog in his hand, and he and Killer stared at each other, Killer frozen and obviously not knowing what to do. At least the fall didn’t seem to have injured him. His bones were very fragile, and Caine had warned her they broke very easily. Azagor lifted his hand until he held Killer in front of his face and pulled his lips back from his teeth.

Abruptly life rushed back into her frozen limbs. “Don’t you dare eat him,” she screamed while praying Killer didn’t pee on the alien’s hand.

The alien looked at the dog and then at her, and his hand closed ever so slightly. Five claws pointed at Killer’s fragile head. He held her dog up to her like an offering, while his vicious claws slowly lengthened.

Marie Dry has really knocked the ball out of the park with this Science Fiction alien romance. The fifth book in the Zyrgin Warriors series, "Alien Captured" is a nonstop adventure ride that will not only keep the reader engaged and turning pages but will pull at the heart strings.

Savannah thinks to save her son by capturing one of the aliens who have invaded Earth. Azagor believes he will capture the heart of Savannah, the woman he's chosen to be his. The problem, Savannah believes him to be an evil demon sent to punish her. Having grown up in a strict religious cult that has shunned technology and where women are slaves, she doesn't know anything about the modern world. Azagor considers himself a modern warrior and is floored at how little Savannah knows and how hard her life has truly been. Slowly Azagor shows Savannah that his intentions are honorable and he's not a demon but more importantly that he will help her find her son.

This was a touching and passionate story with some laughs, heartache, and celebration. I recommend this book and the series by Marie Dry.

Whisky with My Book Review:

I can’t review this book without giving some consideration to the heroine, Susannah. Some might look on Susannah as a weak character. Indeed, in modern contemporary society, she would be considered not only weak, but also backward. But the author provides a thorough background on Susannah, who is very much a product of her upbringing. In this case, I think nature and nurture had it in for her and the other females in her cult. Susannah is a member of a cult that is ruled a man (Brother Josephatus) who fancies himself to be the right hand of God. The women do all the work and have no rights. The women were raised this way and accept the status quo even if they do not like it.

But the cult has abandoned Susannah because they (Brother Joseph) believe she is no good. First, she had a child out of wedlock. In addition to that, she claims to have seen a demon.

Well, that demon was actually the Zyrgin warrior, Azagor. I’m sure anyone could make that mistake. They are green-skinned, red-eyed and have a forehead ridge that could be a horn.

Left on her own, and desperate to get her son Noah back, Susannah’s strengths spring to life. First she conceived the Alien Captured plan. Now that is a title I would not have expected to see in the Zyrgin Warrior series – Alien Captured? The highly trained, arrogant ‘I-am-a-Zyrgin-Warrior‘ type should never have allowed himself to be captured.

And yet, it happened. It would be spoilerish to say much more about the warrior’s capture. But if you think Azagor will stay captive for very long….well, he is a Zyrgin Warrior!

The captive situation puts Azagor just where he wants to be, in the company of Susannah. As you can see, the warrior has some preconceived ideas of what should be happening:

Instead of harboring fantasies of contacting the resistance, she should want to tend to his wound. Sponge down his body and be so impressed with his superior warrior’s physique that she would want to be his breeder.

Susannah treats him as a dangerous enemy to be used. He treats her as a captor to convince to become is breeder. Breeder is the Zrygin word for mate. Azagor (and most of his fellow warriors) don’t have any clue that human women are not all all keen on that word. Misunderstanding ensues, followed by humor.

The lack of understanding about each other and their cultures makes for a lot of misunderstanding. Some is not very funny, but some is quite humorous. What is really funny is what Azagor thinks he knows because of what other human women have told him and the human movies he has watched. I think the cultural differences that create such wonderful interactions are my favorite parts of the Zrygin warrior stories.

But this one also has one more thing that always to appeals to me. A dog. Killer is a Teacup Yorkie – the last of it’s kind. He is a tiny little dog with a huge heart. He takes on the mean green alien without backing down. I can’t help but love this little Killer, even if Azagor thinks it looks like a rat and doesn’t like him:

She was about to grab Killer and run when Azagor stopped as abruptly as he’d started. “He is small and weak. You should kill him. I will get you a better pet.” He absently scratched at his wound, and she swallowed. Didn’t he feel any pain? “The Aurelians have pets.” He said it as if having a pet was the strangest thing to do. “They are called battle leopards. It will protect you.” His lips pulled into what she supposed was his attempt at a smile. If he ever wanted to scare anyone to death, all he had to do was smile. “We’ll make the rat the first snack for your new pet.”

There is more to that rat story, but I won’t say more.

There is also a child, but in this case, he is too young to talk, and therefore does not have that ‘cute kid’ appeal. Susannah’s baby, Noah, was taken from her as soon as he was born. He doesn’t appear until late in the story, but his appearance makes for a heart-wrenching scene. And while the baby does not qualify for cute kid status, the Zrygin warriors reactions to Noah are quite endearing.

There are some interesting, quieter side stories. One about the project of building something in space. Also there is talk of a previous time travel project. I am not sure if I would know more if I had read the first three books in the series? But I would like to know more. Perhaps there will be additional details in book 6.

I really enjoy the alien/human relations in this series. In Alien Captured, the cultural clashes and misunderstandings make for the best rocky start to what will turn into a very cool romance between the determined heroine and the even more determined hero. If you have enjoyed other books in the series, you will like this one. If you are new to the series, go easy on Azagor, until he wises up. You’ll like him!

I received a copy of this book from the author in exchange for my honest review.

Ever since she can remember Marie Dry wanted to travel. She had had the privilege of living in Zambia, Morocco, and Spain and sees herself as a bit of a gypsy. Every few years she gets restless and has to be some place new.

She read romances since she was nine and was fairly young when she decided she would write the perfect story that had all the elements she looked for in a romance. In 1997 she decided to go all out with her writing and to get published. Being published by Black Opal Books is a dream come true for her.

There are several wonderful moments in her life that she would never trade for anything. One of them is meeting President Nelson Mandela and the second being published.
Posted by Kathy Bosman at Monday, June 11, 2018