How The Artist's Way Broke My Writer's Block

I'm writing a blog post, in the middle of a very busy day and week, to share my excitement.

I have just completed a first draft on a novel after a very difficult three years where I only wrote one fantasy novel and one woman's fiction / romance and struggled with multiple writing blocks and major burnout, going over a year without writing anything new.

It all started when I began reading The Artist's Way by Julia Cameron. Her book is addressed to blocked creatives. It's an encouragement, motivator, and a bit of a workbook all rolled in one. It is a bit of religious book, but not in a pushy way, so even those who don't believe in God can benefit from it.

I haven't finished the book yet. It's not that easy to read for me. When I read a self-help book, I strongly dislike long lists of exercises to do at the end of each chapter. They distract me and weight me down. That's why when I first starting reading the book, I had mixed feelings - quite strong ones actually. I loved the way she worked on dispelling some myths that creatives have. But then she wanted us to write "the morning pages." She said we should write three pages of our thoughts or whatever comes to mind, every morning. I was so angry with her, but she insisted it would unblock us. I thought, "How on earth would I find time to do this? I battle to find time to exercise and sleep enough as a single mom of three, running my own freelance business." But I was desperate so I read on. At first, I assumed we should write our writing projects in these three pages. I actually didn't fully understand that it was three page of journaling or free-writing our thoughts to get in touch with our creative side.

I'd already started off a book for Nano and had written about 10K. I'd reached a block in the book and couldn't seem to go on. But I was determined to try this and this book seemed the best bet. So, I found an old notebook in the house, took out my black Bic click pen and began to write. I did do a bit of journaling, but I mostly wrote my book. It was hard at first, but then it flowed. I did it the next day. And the next. I wrote three pages by hand for about three weeks without interruption. A day or two of life getting in the way interrupted it, but then I got back on and wrote.

The key here was setting. I made sure I was in a pleasant setting that was conducive to creativity. I went to my happy spot - on my bed in my room. I sometimes put on soft, instrumental music, or other times lit a candle. I was in a relaxed spot, away from my computer (which I now associate with work) and just having fun. The words would flow. She stressed that we should do it first thing in the morning before our logical / left brain kicked in too strong, and I did start with that. I think it was essential that I did, but then circumstances changed in my life and I needed to get going earlier in the morning, so that no longer worked. But I made sure that before I started my editing jobs for the day and went into editor mode, I did my morning pages.

So, yes, even though my morning pages aren't the same as Julia Cameron's ones, they have worked for me.

I have since read some more of her book and am enjoying it except for the excessive exercises in it, which only overwhelm and guilt me. But I'm deeply grateful for "the morning pages" which got me out of my three-year writer's block.

So, I've written the whole first draft of my woman's fiction / romance. I have a huge job ahead of me - transcribing the writing onto the computer. It's going to take me a couple of months to get the words down. I admit that it's not the fun part of this way of writing. And I still have to give the book a thorough edit and send it out to beta readers before I work toward publication. But hey, the first draft is down and I love the story. That's what counts, isn't it?

Here is the tentative blurb so you have an idea what it's about. Bear with me as I wrote out a whole blurb one day and I cannot find it anywhere. And the title is still under construction. 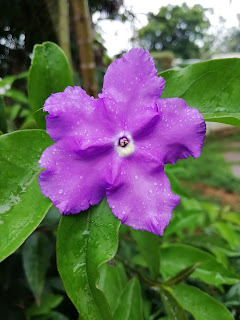 Collette's designs and puts together the flowers for weddings. She's a successful entrepreneur, but her business has been floundering in the last few months. She's helping her friend Rachel, who is a wedding planner, to beautify the bride Debbie's wedding. Rachel's in a panic as a key celebrity bridesmaid - Andy - hasn't arrived and she begs Collette to take her place, seeing she looks uncannily similar to the actress. Reluctantly Collette poses as Andy in the bridal party. Because she looks so much like the actress, a long-lost cousin called Jonas strikes up a conversation with her. He confides in her when he drinks too much and she discovers he's the new florist in town - her competition. Has he been stealing all her clients? They hit it off though, but Jonas (who prefers to be called Jonah) starts to suspect the woman he's attracted to isn't his cousin after all. He's angry, but intrigued. He'd like to see her again, but Collette isn't looking for a relationship.

Her business troubles make Collette look deep inside at her own unrest. No matter how crazy it may seem, she knows she has to follow her heart and her dream and move to the country to farm flowers. She approaches Jonah to help her out and merges their two businesses. They are drawn to each other as they spend time together. But Collette's past hurts come back to haunt her and going back home brings them all to the surface. And Jonah soon discovers that things in her business aren't what they seem - something is going on that could sabotage them all.