My Up and Coming Sweet Romance / Women's Fiction

I'm so excited as Cat Therapy is heading towards formatting with its publisher, Black Opal Books. That means it should be coming out soonish. I have no idea when and I don't have a cover yet, but it's been such a lovely feeling working on the final edits. I read through the book yesterday, even though I was supposed to be having a rest from editing, but I wanted to get it done as next week I'm getting stuck into some editing jobs again. I try not to do much reading over the weekend as I need to rest my mind and eyes. I put it on my kindle. I always seem to find errors that way that I never pick up when reading it on the screen.

I signed a contract for Cat Therapy last year August, but there were some changes happening in Black Opal Books and some of their contracted books got delayed, mine being one of them. The wait was so hard. The book had been through the mill already with a challenging overhaul. It's had so many changes made to it, but I have to admit that I'm really happy with it now and that's rare for me - I'm overly critical of my own work.

I have been so indecisive on what genre to promote this book as. It's got a strong romance threading through it but it also has other stuff, so it reeks of women's fiction. I don't know if you've ever read Katie Fforde. She usually writes a story about a woman who has some life-changing and growth experiences in her life and places a strong romance in her novels. Well, it's like that. I wouldn't say my style is the same as hers, but it kind of reminds me of her books.

It's a book for cat lovers and those who want to learn about the magical love of cats.

Here is my latest blurb: 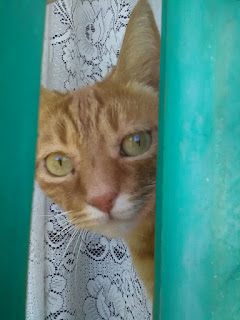 Cat Therapy is a tender and funny women's fiction / romance novel about healing, love, and cats—lots of them!

Two-times divorcée Cherry Smith is quite happy with single life. Well, a little lonely at times—until her elderly friends give her four cats. She already has two cats and a dog. Can she handle six cats? When the kitten needs her shots, she visits the new vet in town. Dr. Jeff Clark turns out to be even more handsome than what she's heard. But Cherry can't let him distract her. She's been burned too many times by attractive men. He makes her feel uncomfortable, especially when she tells him she has six cats, and he seems to disapprove. To pacify him, she says that she's running a cat therapy hotel. As she ponders the lie on her way home, she realizes what a fantastic idea it is. With the help of her friend Delia, they set up a bed and breakfast facility.

People come from far and wide to enjoy the love of her cats, including a gentle widower named Seb, who needs help with his grieving son. Cherry should really go for someone like him, but when the impossible Jeff Clark keeps wanting to check on her business, she can't help wanting to be with the man who takes her breath away. Friendship with him wouldn't be a good idea because she likes him too much and it's way too soon after his divorce. They just can't seem to see eye to eye either. Maybe she should rather date comfortable Seb. When Cherry is swept away by the trials and joys of her cat therapy hotel, she has to learn what she wants most in life and the true meaning of love and friendship.